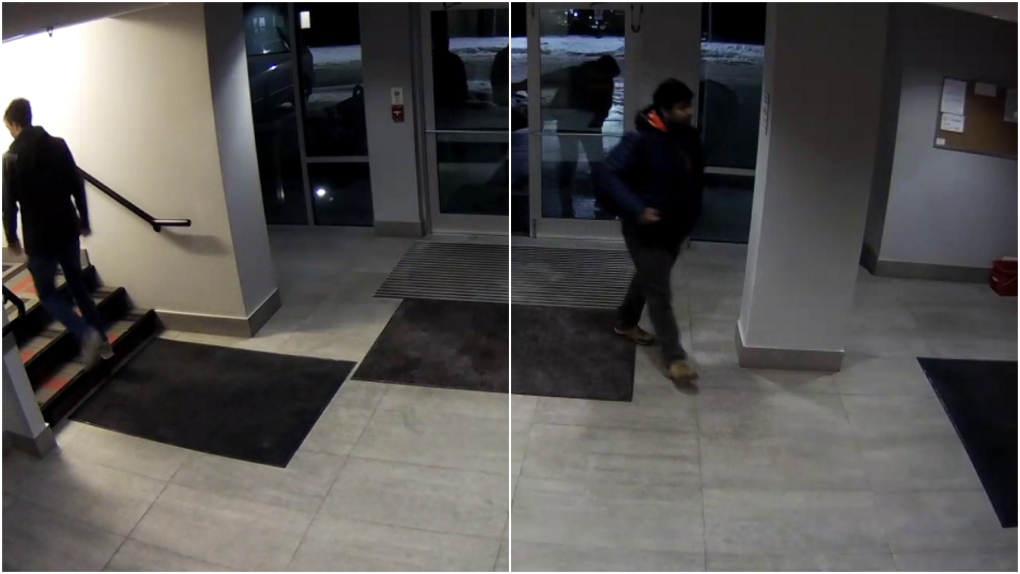 Two men sought by the RCMP as possible witnesses are pictured in photos from surveillance camera video.

VANCOUVER -- Police are asking two men seen in surveillance video that captured a disturbing wellness check in B.C. to come forward as part of their investigation.

In a news release Wednesday, the RCMP's Southeast District asked the public to help identify the men seen in the lobby of a building in Kelowna.

The video shows the men in the building at 883 Academy Way. One is seen heading up a stairway, while the other is seen walking in through the front doors.

The man who goes upstairs has been described as light skinned with light hair. He was clean shaven at the time, about 5:45 p.m. on Jan. 20, and was wearing blue jeans and a jacket that may have been green.

The other man is described by police has having dark skin with dark hair and facial hair. He was wearing a dark-coloured winter jacket that may have been blue. The jacket has an orange-lined hood. He also had on a backpack at the time.

The RCMP say they're looking to identify the men, as they may have been witnesses to an event currently under investigation.

The men are seen in video released to the public by the lawyer of a woman visited by an RCMP corporal that day.

Surveillance video from the building's hallway shows nursing student Mona Wang wearing only a bra and leggings as she's dragged through the building.

Later, the officer can be seen stepping on Wang's head.

Wang filed a civil suit against officer Lacy Browning, and there is also a criminal investigation underway.

Last week, the high-profile criminal probe was sent to the RCMP by the investigating Abbotsford Police Department.

The RCMP says further investigation is required, and that the necessary follow up is underway.