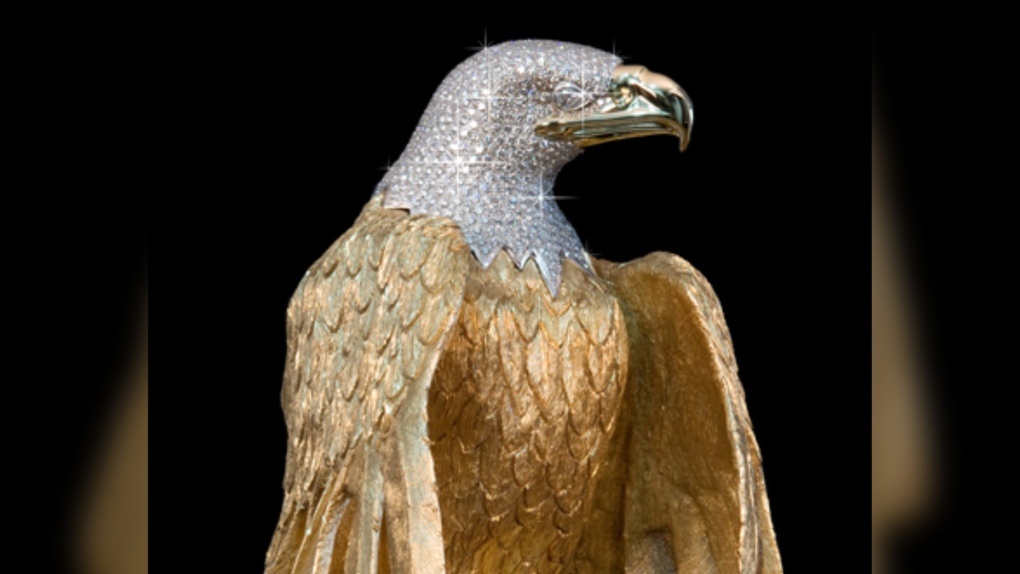 The eagle statue is shown in an undated handout photo.

VANCOUVER -- A legal battle over a missing diamond-encrusted eagle statue valued at nearly $1 million will continue, more than four years after the artwork was stolen during a robbery in Delta, B.C.

In a unanimous ruling issued Monday, the B.C. Court of Appeal has sided with Lloyd's Underwriters and agreed that a default judgment against the insurer should be set aside.

Ron Shore, president of a company called Forgotten Treasures International, won the judgment in 2018 requiring Lloyd's to pay a claim for the loss of the sparkling statue.

Court documents show Lloyd's denied Shore's claim, arguing he violated conditions of the insurance policy, including that the statue be constantly safeguarded by two people.

The eight-kilogram gold creation studded with 763 diamonds and appraised at $930,000 was going to be the final prize in an international cancer fundraiser.

Justice Peter Voith agreed with a B.C. Supreme Court decision that set aside the default judgment, saying the insurer appears to have solid evidence to oppose the claim.

On its website, the Supreme Court says default judgments can be filed against defendants if they fail to respond to the notice of a civil lawsuit, do not comply with the rules or a response to a civil claim is withdrawn.

With the default judgment set aside, the matter may return to Shore's civil claim filed in May 2018, alleging breach of contract and failure to investigate the insurance claim in a timely manner, among other things.

The statue remains missing after Shore reported it was taken in May 2016 by what the court describes as “unknown assailants” as he placed a knapsack carrying the statue in the trunk of his car.

Shore made an emotional plea for the return of the statue at a news conference shortly after it was taken, saying two men ambushed him, hit him over the head with a large flashlight and stole the eagle, plus a less-valuable decoy.

This report by The Canadian Press was first published Nov. 30, 2020.