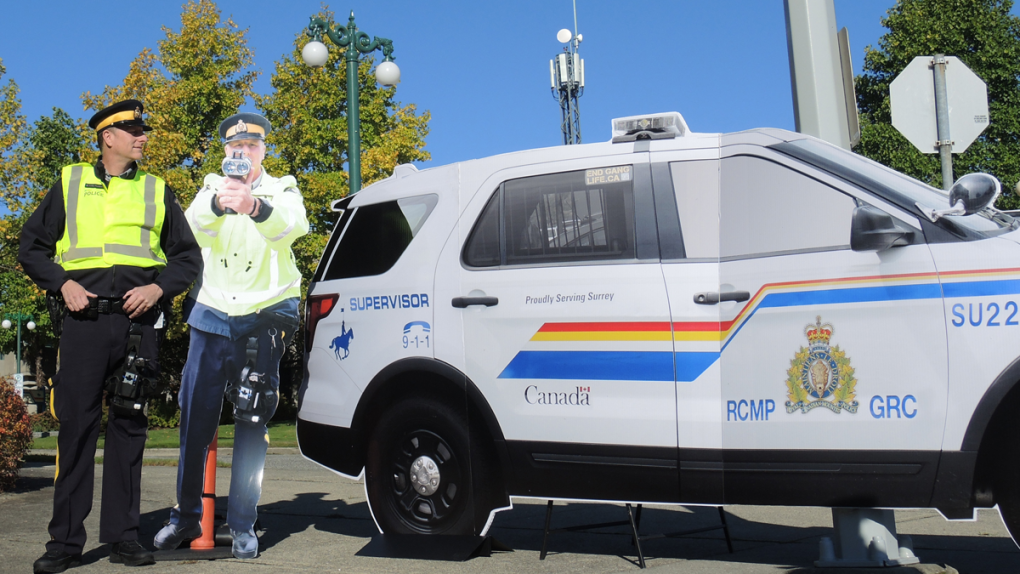 A cut-out RCMP officer 'stands' next to a two-dimensional cruiser in this photo provided by Surrey RCMP.

VANCOUVER - Mounties in Surrey, B.C. are the latest to try out a strategy making its way around the Lower Mainland.

The RCMP announced earlier this week it would be deploy its "newest recruits" around the city in an effort to target dangerous drivers.

"They're reminding motorists to 'cut-out' their unsafe driving habits!" the detachment wrote in a news release Wednesday.

Mounties are installing two-dimensional cut outs of officers holding radar guns and of their cruisers. The goal is to "maintain an overt presence," the RCMP said.

An unsuspecting driver may spot the cut out and realize they need to slow down, or put away their phone.

In addition, the fake cops and cruisers are a warning.

"Our 'Mountie Cut-Outs' may just have a real-life partner nearby," Sgt. Ian McLellan said.

Mounties worked with ICBC and the City of Surrey to identify high-risk areas to be targeted with enforcement initiatives like the cut-outs.

Vision Zero Surrey will now collect data from those areas to assess the impact of the project, the RCMP said.

Surrey is not the first city to try out the cut-outs. Among other cities, North Vancouver is also testing the idea with help from a wooden version of a constable who recently moved out of the province: Matt McCoy.

And last year the Coquitlam detachment introduced the public to "Constable Scarecrow," a metal officer of the same design.