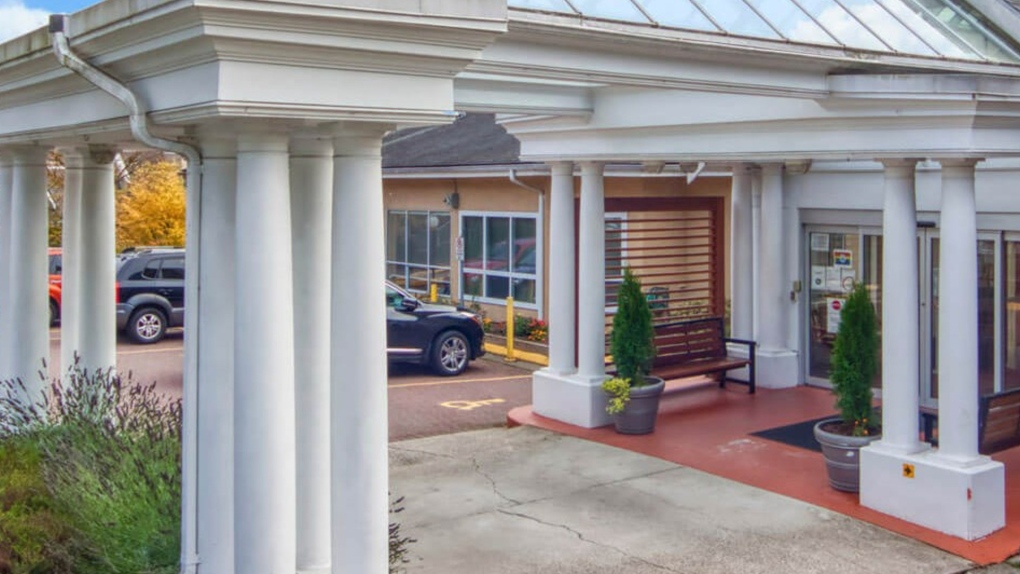 The entrance to Royal City Manor in New Westminster is seen in this photo from the care home's website.

VANCOUVER -- One of B.C.'s largest care home outbreaks of COVID-19 is now officially over.

The outbreak at Royal City Manor, a long-term care home in New Westminster, began on Jan. 3 and quickly grew to include dozens of residents and staff members.

As of March 3, the outbreak was responsible for 133 cases of the coronavirus. A total of 102 residents were infected, and 31 died, according to data from the B.C. Centre for Disease Control.

On Sunday night, Fraser Health announced in a news release that the outbreak had been declared over.

"With the implementation of comprehensive strategies to prevent and respond to COVID-19 in care facilities, there are no longer any COVID-19 cases at this location," the health authority said in its release.

The end of the Royal City Manor outbreak means there are no longer any active outbreaks involving more than 100 cases of COVID-19 in long-term care facilities in B.C.

The largest ongoing outbreak in a long-term care home in the province is now the one at Acropolis Manor in Prince Rupert, where 57 people had tested positive and 14 residents had died, as of the latest BCCDC update.

Health officials have attributed the decline in the number and severity of outbreaks in care homes in the province in recent months to the proliferation of COVID-19 vaccines in the system. As of mid-February, some 91 per cent of residents in long-term care had received at least one dose of a vaccine.

Outbreaks in hospitals, meanwhile, have not noticeably declined in frequency in 2021.

On Saturday, an outbreak was declared at Kelowna General Hospital, where a separate, unrelated outbreak was already ongoing in a different unit.

On Sunday, Interior Health announced that the earlier outbreak, in unit 4B, had ended. A total of seven people - six patients and one staff member - tested positive for COVID-19 in association with that outbreak. Two of the patients died.

“I would like to thank the team at KGH for their efforts in containing this outbreak and preventing further spread throughout the hospital,” said Interior Health president and CEO Susan Brown in a news release Sunday.

“We send our condolences to the families of the two patients who passed away and will work equally as hard to contain the second outbreak declared on March 6," Brown added.

Less than 1 per cent of vaccinated B.C. residents have gone on to catch COVID-19, health officials say