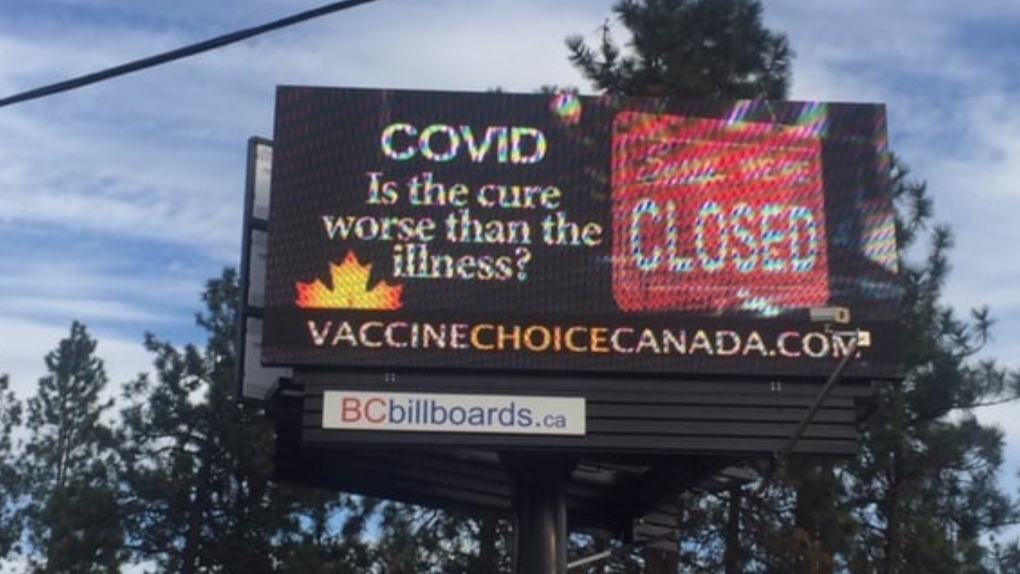 Vaccine Choice Canada shared an image of the billboard, which was found to be "misleading" by Canada's Ad Standards council, on its Facebook page last year.

VANCOUVER -- A billboard that some interpreted as questioning the safety of COVID-19 vaccines was "playing upon fears rather than providing facts," according to Canada's Ad Standards council.

The billboard was purchased in B.C.'s Okanagan last year by Vaccine Choice Canada, a group that rejects the overwhelming consensus in the scientific community that vaccines are safe.

The ad read "COVID. Is the cure worse than the illness?" next to an image of a "Sorry, we're closed" sign, with the Vaccine Choice Canada website address featured in large letters at the bottom.

The billboard prompted several complaints from people worried it could contribute to the spread of "dangerous" and false information that could pose a risk to public health, according to the Ad Standards council's decision, which was recently posted online. The council agreed.

"The majority of council were of the view that the general impression created by the advertisement was that a vaccine as a cure for COVID-19 is, or could be, worse than contracting the disease itself," the ruling reads. "The advertiser provided no evidence to support this claim. Council was further unaware of any competent and reliable evidence currently available to support such a position."

It claimed such debates and discussions are "systematically censored" – though details of the alleged censorship are not provided in the council's decision – and shared a sampling of letters of support it received after putting up the ad.

CTV News reached out to Vaccine Choice Canada for further comment on the ruling, and information on how much the billboard cost, but has not heard back.

While not everyone on the Ad Standards council agreed, most found the placement of the word "cure" above the words "vaccine choice" could lead people to believe the billboard was about the COVID-19 vaccine and its safety.

"According to the majority of council, taken in the context of a global pandemic and the possibility that 'cure' could mean vaccine, sowing this doubt could contribute to vaccine hesitancy by playing upon fears rather than providing facts," the ruling reads.

The Ad Standards council ultimately determined the billboard violated clauses 1(a), 10 and 11 of the Canadian Code of Advertising Standards. Clause 1(a) bars ads from containing "misleading claims, statements, illustrations or representations," while clause 10 deals with encouraging unsafe practices and clause 11 prohibits playing on superstitions and fears.

The council is a regulatory body whose membership is split between the advertising industry and public. While it can publicly identify ads and advertisers who fail to comply with its direction through rulings, the council can't levy fines.