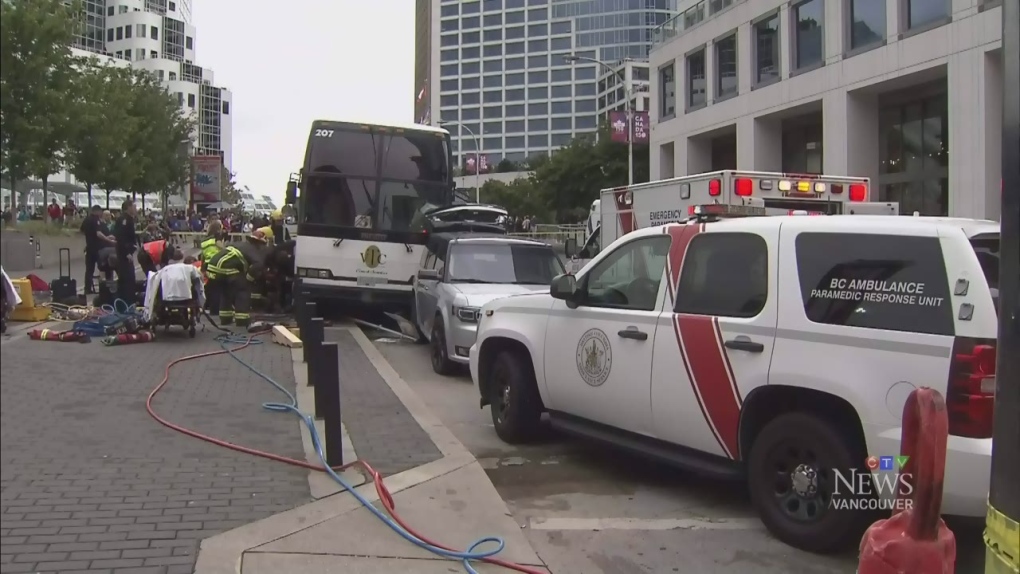 VANCOUVER -- The B.C. Coroners Service has released its report into the death of a U.S. tourist who was struck and killed by a tour bus outside Canada Place three years ago.

The report classified 49-year-old Michael Plevyak's death as accidental, and found he died from "multiple blunt force injuries sustained as a result of being struck by a moving bus."

Plevyak died on Aug. 13, 2017. The Massachusetts man and his family had just returned from a cruise and were loading luggage into the back of their SUV in the 900 block of Canada Place at the time of the crash.

According to the report, a shuttle bus parked behind them started moving forward and hit Plevykak and the back of his vehicle. He became trapped underneath the bus.

Plevyak was taken to Vancouver General Hospital where he was pronounced dead shortly after arriving in the emergency room.

The bus driver, Patrick Campbell, told Vancouver police he was about to start his second trip of the day at the time of the crash. He says he performed a "routine check" of the bus before his first trip, which included checking the brakes.

"Everything was in order," the report reads.

"For the second trip, he released the emergency brake of the bus to move forward and immediately pressed the brake pedal, however the bus continued to roll forward striking Mr. Plevyak and his vehicle. The driver stated the brake pedal went down to the floor without any resistance."

The coroner says the weather was clear and the road was dry at the time of the crash, and a mechanical inspection of the bus found no defects and that the brakes were working properly.

"It is reasonable to conclude that the driver of the bus may have mistakenly pressed down on the accelerator pedal instead of the brake pedal and was therefore unable to stop the bus," the report reads.

Campbell was licensed, and the Commercial Vehicle Safety and Enforcement branch found the bus met safety standards and did not make any recommendations.

Campbell was fined $1,800 and pleaded guilty to driving without due care and attention in 2019. The judge did not impose a driving ban.

Two other victims, a 15-year-old girl and an elderly man, were also injured in the crash. ​

According to court documents, Raina Plevyak had a fractured pelvis and scarring on her right leg. Manjit Aulakh's bladder and urethra were crushed, and suffered multiple fractures in both hands, a partial loss of a finger, a punctured lung and bruising.

The coroner made no recommendations.