Cleaning up the town: Abbotsford man collecting trash others leave behind 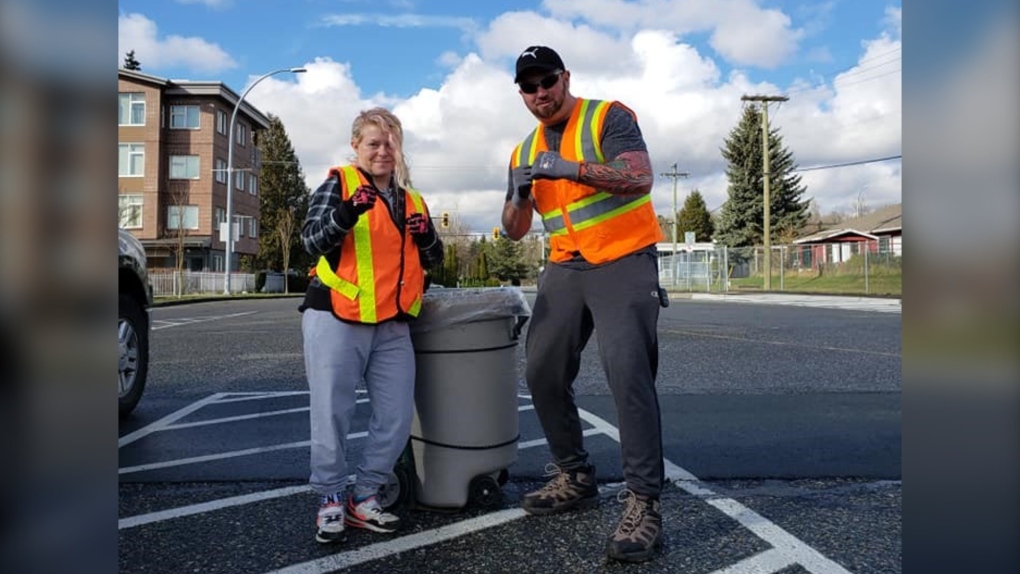 Nick Pilon and Kim Spanswick on the job. (Fraser Valley What's Up Now/Facebook)

VANCOUVER -- Nick Pilon just couldn’t take it anymore. He grew up in Abbotsford, B.C. and has lived there his entire life.

“I never remember it like this,” Pilon said in a phone interview with CTV News. “It’s gotten so bad.”

By “it,” he means garbage. The unsightly, unhealthy, and sometimes smelly items that litter the landscape, left behind by others who just couldn’t be bothered to clean up after themselves.

So he took matters, and trash, into his own hands. For several months, Pilon has been donning big boots, gloves and a safety vest and bagging mounds and mounds of trash riddling Abbotsford’s neighbourhoods.

That’s in addition to his full-time job as a forklift driver.

Armed with his trusty plastic picker and a garbage bin strapped to a dolly he found, he trolls the streets, alleys, parks and ditches, grabbing everything from discarded masks to liquor bottles to wrappers and oil containers. He’s seen it all.

The idea came to him when he was on a walk in his neighbourhood and his dog almost stepped on a shattered bottle. Instead of writing an angry email, he rolled up his sleeves.

Pilon documents his clean-up efforts on his public Facebook page, called “Fraser Valley What’s Up Now.”  He posts photos and videos of the messes he encounters and the amount he collects. He also posts maps of where he’s been and his next targets. He’s gotten lots of positive feedback from the community in the comments, including a dad whose daughter and schoolmates walk through an area Pilon had just swept.

“We collected eight or nine hypodermic needles there yesterday,” Pilon remembers. “He appreciated that and said, you know, how much it means to (him). She travels through there every day.”

Pilon finds used needles and syringes constantly and is cautious when handling them. He’s trying to get his hands on a sharps disposal container to make it even safer. He uses clear plastic bags to discourage people from opening them to see what’s inside. So far, it’s working.

Pilon is often joined by his girlfriend Kim Spanswick when on his mission.

"I love it, it's great exercise, it cleans up the environment,” Spanswick said in a phone interview with CTV News. "When we go down the streets that we've done and we look and it's all clean, it’s great.”

Once the garbage is bagged, Pilon leaves it in an easy-to-access spot, then uses the City of Abbotsford’s app to report it as an illegal dump, giving the location for pickup.

“They do pick it up,” he said. “Within a few days it gets picked up, so it is working.”

Pilon says he’s going to continue the work to clean up his town, one bag at a time, and he’d like others to join him, although right now the pandemic prevents people from gathering in large groups. Several individuals have already posted photos of their clean-up efforts on the Facebook page in recent weeks. Pilon is pleased with the campaign, but says his ultimate goal is to encourage people to stop dumping their trash in Abbotsford’s shared spaces at all.