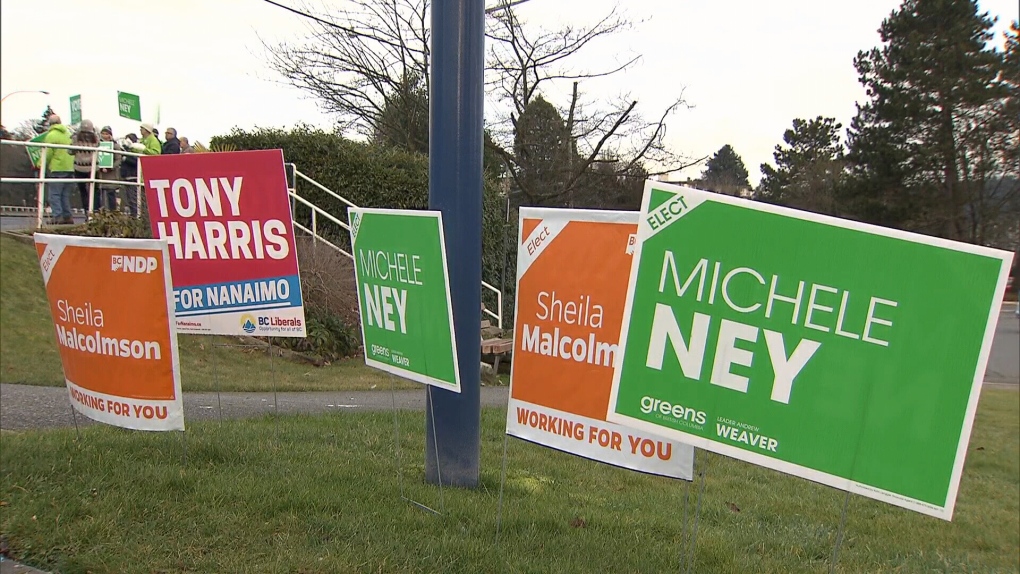 Byelection campaign signs are seen on a lawn in Nanaimo, B.C. in this January 2019 file image.

At the NDP headquarters in Vancouver on Monday, B.C. director Kris Sims said the group is launching a campaign protesting the per-vote subsidy, which gave political parties $2.50 for every vote they got in the 2017 election.

She said taxpayers shouldn't be paying for partisan politics.

"We’re completely fine with taxpayers’ money going to Elections BC to run the actual vote, to pay for the ballots, to pay for the buildings - but that’s not what we’re talking about," Sims said. "We’re literally talking about money going to the NDP party, to the BC Liberal Party, to the Green Party - to make their signs, to run their ads, to staff their war rooms, and to do all those robo-calls. Do you want to be paying for that? We don’t think the average taxpayer does. That’s why we’ve launched this campaign."

The campaign includes a website, PoliticianWelfare.com, a petition, bumper stickers, a letter-writing campaign and a mock radio attack ad.

The CTF said parties will receive more than $16.4 million from taxpayers through the per-vote subsidy over the next four years. It was originally introduced in 2017 as the NDP's answer to banning donations from corporations and unions.

The money helps pay for election signs, campaign advertising, and attack ads. The CTF said taxpayers will also pay 50 per cent of a party's election campaign expenses, provided they get at least 10 per cent of the vote, which comes to another $11 million.