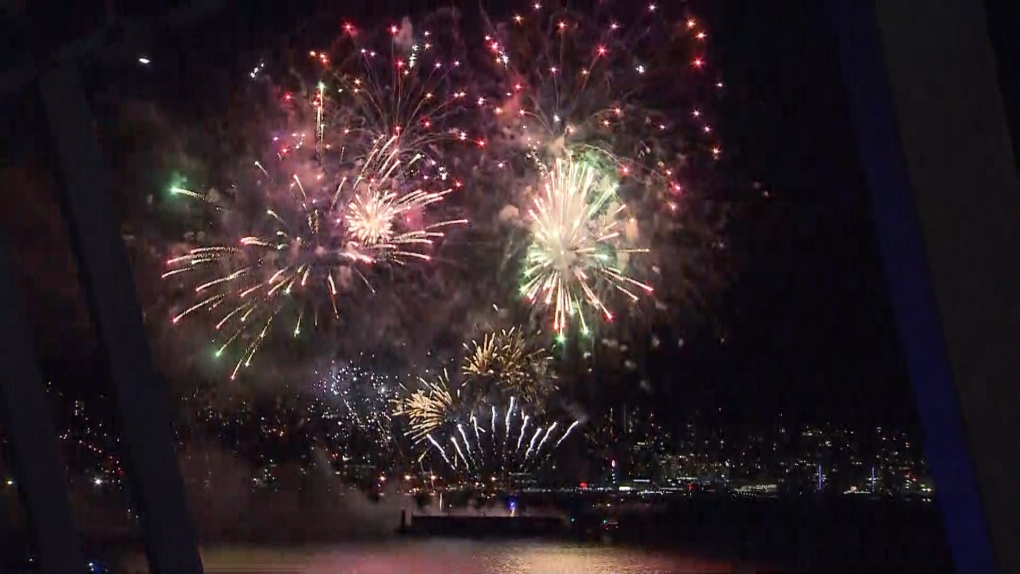 Canada Day fireworks are seen in an image from 2019. This year, some communities are livestreaming virtual fireworks shows.

VANCOUVER -- Canada Day will look a bit different this year, as restrictions remain in place in B.C. to flatten the province's COVID-19 curve.

With large gatherings banned, some events have been cancelled, and others will be held online only.

CTVNewsVancouver.ca's annual list of Canada Day events is a bit shorter this year, but here's a quick look at some of the events you can "attend" from the comfort of your own home.

One of the largest parties in the country traditionally kicks off at Canada Place, but it was cancelled this year.

Instead, organizers invite the public to watch a two-hour show put on by the federal government.

There's a daytime show that starts at 4 p.m. local time, and an evening show starting at 5 p.m.

Vancouver's Kitsilano neighbourhood is going along with its annual Showboat event, but the 85th season will be held online.

There's a special show scheduled on Canada Day starting at 10 a.m. on Facebook. A children's show will be followed by what organizers call an "action packed" evening of music starting at 6 p.m.

An event billed as "Canada's only Canada Day parade" will be hosted at the Pacific National Exhibition grounds on the first as well.

The PNE will hold what it calls a "reverse parade," meaning spectators will drive their vehicles along the parade route.

Sights include live performances, logger sports, a celebration of hockey and fair food, and guests are encouraged to decorate their vehicles and dress up in red and white.

Those who want to buy food must pay in advance, and the experience itself is $10 per car.

Celebrate Canada at a virtual event hosted on the North Shore. From 1 to 2:30 p.m. there will be virtual performances for all ages.

One of the best-attended events is Surrey Canada Day. This year, it too will be online, and viewers can tune in on Facebook or YouTube.

There's a family hour scheduled from 10:30 to 11:30 a.m., and regular programming airs between 6 and 9 p.m. The party finishes with a virtual fireworks finale.

Canada Day by the Bay will be by the computer instead this summer.

Juno-award-winning Washboard Union is headlining the show, and other performances and activities are planned for the event between 7 and 9 p.m. It can be watched on YouTube and Facebook.

Canada Day in Coquitlam includes the singing of O Canada, and performances from a variety of artists and entertainers. Programming starts online at noon, with the final item on the agenda scheduled to start at 6:15 p.m.

In nearby PoCo, things are a little different.

There will be a drive-thru barbecue from noon to 4 p.m. at the firehall at 1725 Broadway St.

The community will sing O Canada, along with cities across the country, as part of the 7 p.m. cheer for front-line workers, and virtual fireworks will be streamed online.

The city will also have a live broadcast from 2:30 to 4 p.m. featuring Canadian performers.

And the city suggests neighbours get together to host virtual block parties. A page on its website provides more info on how to set one up.

Residents of Maple Ridge can mark Canada's 153rd birthday with livestreamed entertainment, contests and activities, and games and "printable fun."

There won't be any hay rides, cake or petting zoos at Fort Langley this year, organizers say, but Canada Day can still be celebrated virtually.

The Township of Langley is hosting an online event that includes on-demand videos of local performers, workshops and activities and an opening ceremony.

The fort is technically open, but there's a 50-person limit within its walls, and visitors are advised to check the Fort Langley National Historic Site website before visiting so they can be prepared.

The annual Willoughby Community Park event is cancelled this year.

The party in Mission starts at 10:30 a.m. with a livestream on the city's website.

If you can't watch it at that time, it will be made available on YouTube and Facebook.

The broadcast includes the national anthem, a flag raising ceremony, speeches and short video segments highlighting members of the community.

Locally, the FVRD is hosting a decorating contest for residents of Hope and surrounding areas.

The district directs those looking for a virtual ceremony to the one hosted online by Heritage Canada.

Similar events are planned elsewhere in B.C., including in Armstrong, Fort St. John and the North Okanagan. Find out more about those events on this page from Canada.ca.