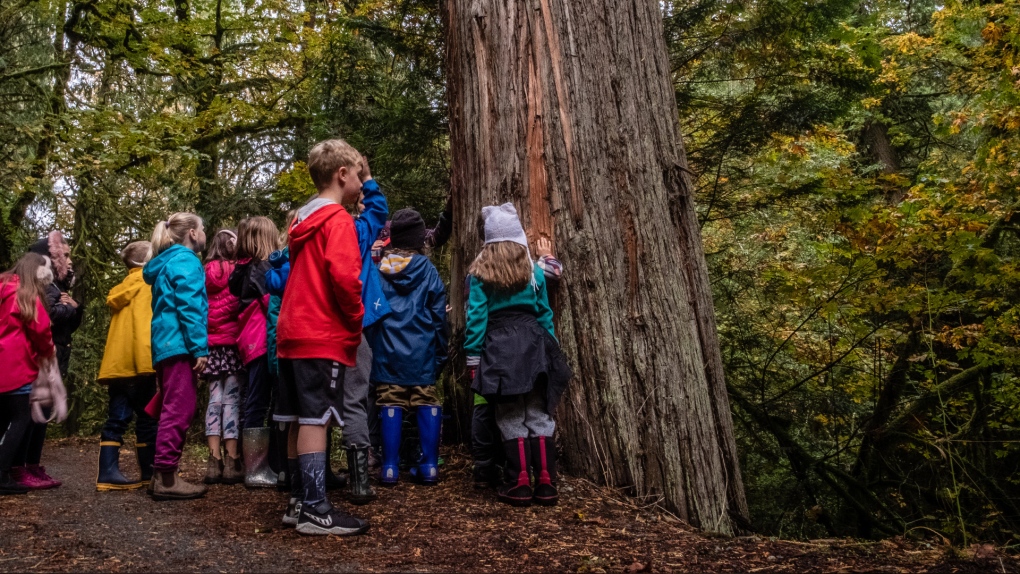 A school group connects with an ancient cedar during a Sierra Club BC nature education program in Goldstream Provincial Park. (Mya Van Woudenberg-Sierra Club BC)

Super Natural British Columbia. The slogan is on license plates and tourism campaigns. Whether you live on the islands or in the mountains, up north or in the south, the landscape is what ties all British Columbians together. The province is defined by our rugged coastline, picturesque mountains, and the seemingly-endless forests.

Unfortunately though, we’re at risk of losing a big part of what defines British Columbia. Our biggest, tallest, and oldest trees - and the ecosystems they’re a critical part of - are being cut down at an alarming rate. Those giant trees grew untouched for thousands of years, but today, less than 3% of the ecosystems capable of growing those huge trees remain. And without intervention, we’ll lose the few big-tree forests we have left.

There is some good news, though! The BC Government recently released a report from an independent old-growth panel called New Future for Old Forests, and a wide range of concerned individuals, communities and First Nations leaders are calling for full implementation of all of its recommendations.

One of the strongest calls for action to come from the report is the recommendation to create a paradigm shift in how we manage forests through legislation and regulation. Namely, rather than managing forests for timber alone, the report calls to focus on creating and maintaining healthy ecosystems, which will help ensure our forests are able to continue providing fresh water, clean air, Indigenous cultural practices, recreational land, fire protection, biodiversity, and timber across the province. Yes, we need wood products, and forestry is an important industry in British Columbia. But to save and create forestry jobs for generations to come, we need healthy, well-managed forests and regulations that ensure endangered ecosystems and species habitat are protected..

“Forestry has a bright future, but it has to be sustainable,” said Premier John Horgan. “And it has to recognize a whole host of values, not just as two by fours.”

While the report was widely lauded, some advocates say the initial steps taken by the B.C. government fall far short of what's needed. For example, the deferral areas announced in September included less than 1% of the last 415,000 hectares of old-growth forests with truly big trees that remain in the province. Without immediate action in the next few months, almost all of these at-risk forests will remain on the chopping block.

A survey from Sierra Club BC found that more than 90% of BC residents support protecting the old-growth forests. But, to ensure the provincial government prioritizes the recommendations from their report, there needs to be more active participation from the public to show they support those plans. The report is a very promising first step. Now, we need to keep moving forward.

Changing the way we nurture and use our forests is a tall order. It requires us to alter our collective mindset and think differently about the forests and their role in our lives. While our biggest and tallest trees have had thousands of years to grow, we don’t have the same luxury of time to save them.

To learn more about how you can help breath new life into our old forests by speaking up for them, visit https://www.sierraclub.bc.ca/ancientforests today.