BC Lions mathematically eliminated from playoffs after loss to Edmonton 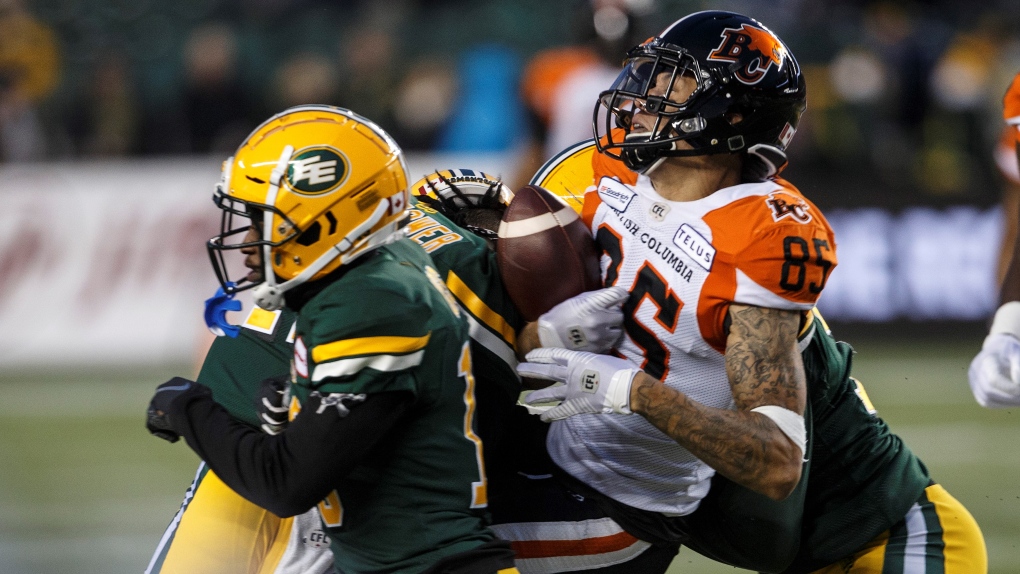 B.C. Lions' Rashaun Simonise (85) is tackled by the Edmonton Eskimos during second half CFL action in Edmonton on Saturday, Oct. 12, 2019. THE CANADIAN PRESS/Jason Franson

EDMONTON - Shaquille Cooper rushed for 94 yards and a touchdown to help the Edmonton Eskimos beat the B.C. Lions 19-6 on Saturday night and clinch the CFL's last remaining playoff berth.

The Eskimos improved to 8-8 after winning for just the second time in their last seven outings, while the Lions drop to 5-11 after seeing their four-game win streak halted with B.C.'s first loss since Sept. 6.

The Lions were officially eliminated from post-season contention with the loss at Commonwealth Stadium on Saturday night.

B.C. quarterback Mike Reilly, who leads the CFL in passing yards, left the game and did not return after being hurt early in the first quarter with what was revealed as a broken left wrist.

Danny O'Brien took over under centre for the veteran all-star, whose season is likely over. Reilly was the lone CFL quarterback to have made every start for his team this season.

Edmonton opened the scoring on a 22-yard field goal from Sean Whyte with 8:59 remaining in the first quarter. On the ensuing possession, Reilly was tackled by a pair of Eskimo defenders while attempting a pass, and immediately headed to the locker room where his injury was confirmed.

The home side went ahead 10-0 just 16 seconds into the second quarter when Cooper plunged in from two yards for a touchdown to cap an 11-play, 63-yard drive.

Whyte kicked a 49-yard field goal just over two minutes before halftime to extend Edmonton's lead. The teams traded field goals in the final minute, with B.C.'s Sergio Castillo connecting from 20 yards and Whyte answering from 44 on the final play of half, sending Edmonton to the locker room with a 16-3 advantage.

After a scoreless third quarter, B.C. opened the fourth with a 46-yard field goal off the foot of Castillo, but the Lions would get no closer.

Tyquwan Glass picked off O'Brien deep in B.C. territory with just over a minute left to snuff out B.C.'s last hope at a comeback, and Whyte booted a 21-yard field-goal with 14 seconds remaining to close the scoring.

B.C. next plays Friday when the Lions host Saskatchewan in Vancouver. The Eskimos have a bye week before returning to action against those same Roughriders in Edmonton's home finale on Oct. 26.

This report by The Canadian Press was first published Oct. 12, 2019.