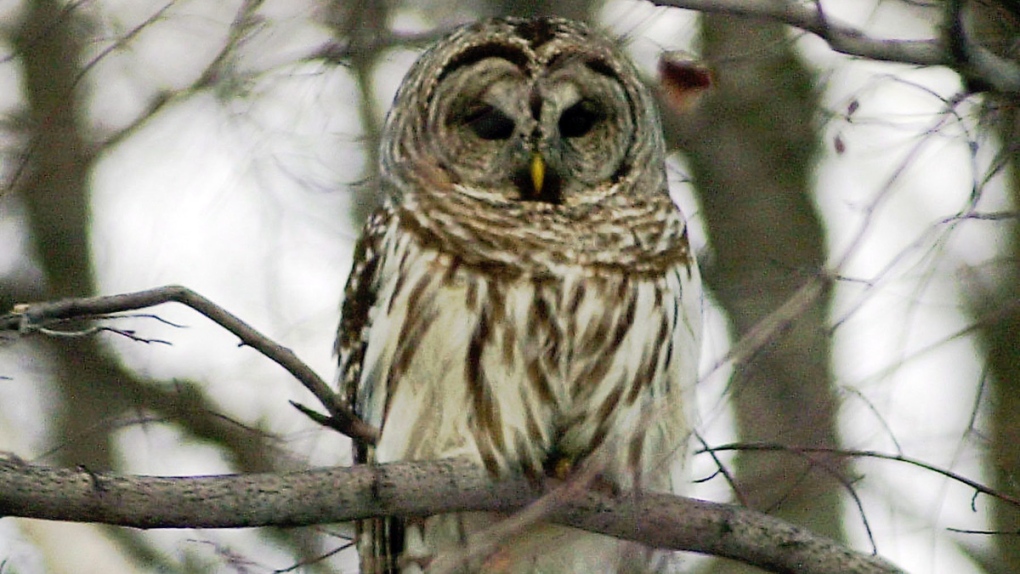 VANCOUVER -- A spike in owl sightings in downtown Vancouver could be good news for ridding the city of pesky rodents, a wildlife group says, but there's a downside for the birds.

Photos of barred owls sitting outside transit stations and on building awnings have been circulating on Twitter in recent weeks.

Rob Hope with the Orphaned Wildlife Rehabilitation Society in nearby Delta said more predators like barred owls in the city can result in less prey.

"Rats and mice have always been a problem in Vancouver. With (owls) hanging around, more predators, they'll be popping more prey," he said Friday.

Hope said the bird population in the city can ebb and flow and there appears to be a population of younger owls "that are looking for a hunting area or anywhere they can basically set up shop."

Their usual targets are rats or pigeons, he said, adding downtown Vancouver seems to have a plentiful supply of the owls' preferred food.

While a lower rat population benefits the city, the birds are at risk in that environment, Hope said.

Owls can be hurt or killed flying into glass buildings or being hit by vehicles while hunting, he said, contributing to an increase in the number of calls his organization has received about injured wildlife.

"When they're on the sides of the roads hunting for food, obviously when a car is coming and they're taking off or landing for food is when they're getting smoked."

Another major threat for the barred owls is rodenticide. Hope said owls eating rats that have consumed poison can themselves be poisoned.

Rat poison is the cheapest and easiest way to get rid of the pests, Hope said, but it can take up to 10 days for a rodent to die, after they're left in a drunken-like state.

"If you have a rat that is hauling butt and you have another one that is a little off kilter, as opportunistic hunters that they are, they're going to pick off the one that is kind of drunk and that's usually the poisoned one," Hope said.

He is encouraging people to switch to snap traps instead of poison, to minimize the harm to owls and other predators.

With increased development, Hope said it's possible that more owls will move into the city as they are pushed out of their natural habitat.

Barred owls have been culled in some areas of British Columbia to reduce competition and protect the endangered spotted owls, which are considered priority species. But Hope said the barred owls' presence in Vancouver shouldn't have a negative effect on other species.

Since barred owls are "more docile" than other birds, Hope said it's not surprising that some of the photos taken by the public are within close range.

"They're not the smartest ones, I guess you can say ... even in the wild people can usually get five or six feet away from them before they're spooked," he said, adding anyone trying to snap a photo should still give a bird some space.