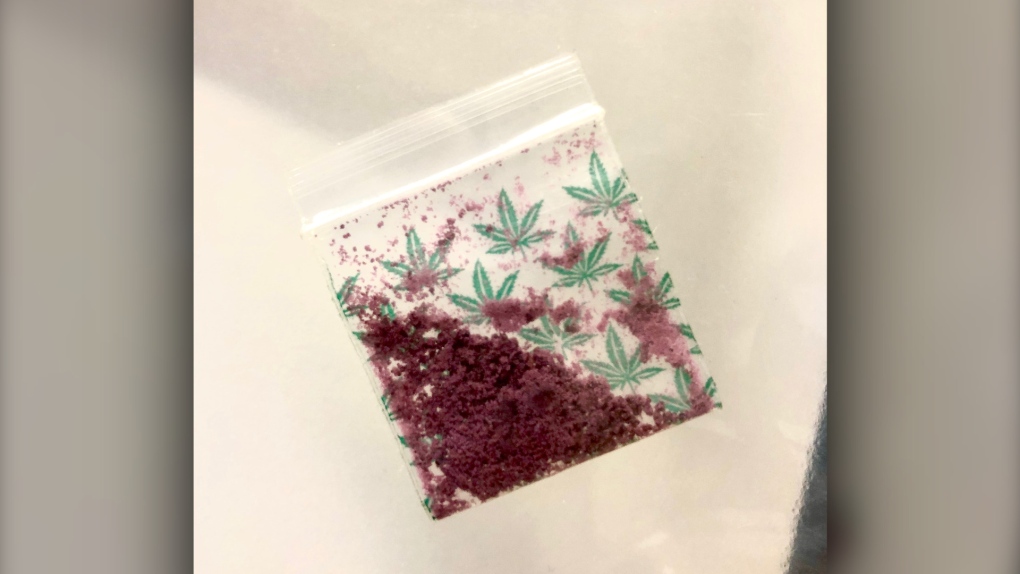 Police say a bag containing suspected fentanyl was found on a children's playground in Kamloops, B.C. on July 5, 2020. (Handout)

VANCOUVER -- Police say it's fortunate no one was hurt after a baby discovered a bag containing suspected fentanyl in a Kamloops playground over the weekend.

Authorities said the 11-month-old found the drugs on Sunday morning in McDonald Park, but that baby's mother quickly grabbed the bag before it could do any harm.

"Kamloops, like many other communities in Canada, is still in the grips of an opioid crisis," Staff Sgt. Simon Pillay said in a news release.

"Thankfully in the case at hand an attentive parent caught her child with these found drugs before any harm could be done."

While Sunday's incident involved a baby, police said it should serve as a reminder to parents to speak with their older children about the hazards that discarded drugs and paraphernalia can pose in public places.

Kamloops RCMP shared an image of the drugs, which were purple in colour and found in a bag marked with green cannabis leaves.

Authorities said fentanyl has been the drug of choice for traffickers in the area because it's cheap and potent, and that some dealers will add colouring as a signature. Purple is the most common colour used on fentanyl found in Kamloops, according to police.

Authorities said anyone with information on drug trafficking activity in Kamloops should call the local RCMP detachment at 250-828-3000.