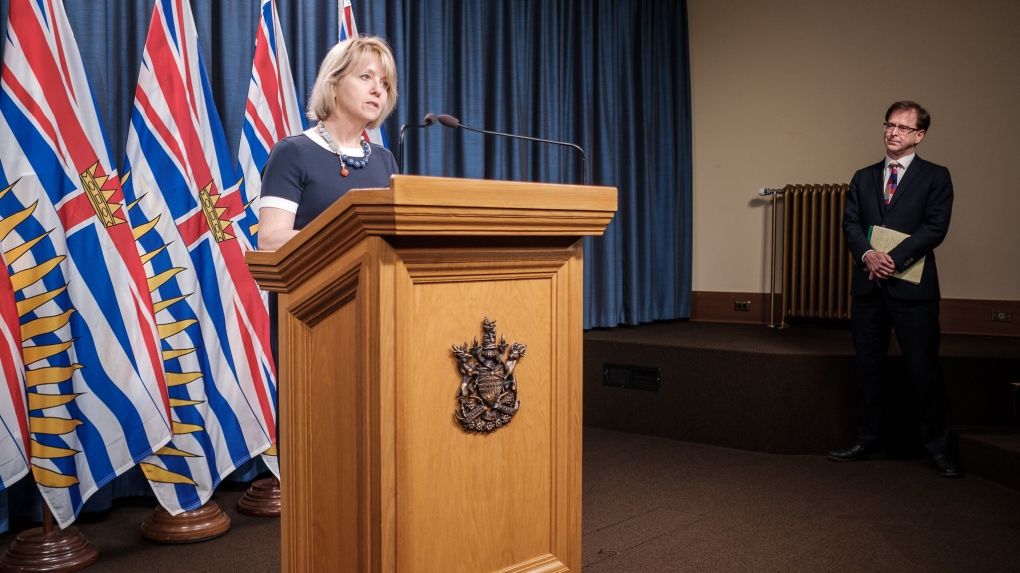 Dr. Bonnie Henry and Health Minister Adrian Dix give an update on the spread of COVID-19 in B.C. on May 11, 2020. (Province of BC/Flickr)

VANCOUVER -- B.C. health officials announced another 234 cases of COVID-19 on Thursday, as well as the death of a senior who caught the disease at a "small birthday party."

Provincial health officer Dr. Bonnie Henry said the family tragedy highlights how dangerous it can be to gather indoors, even in small numbers, while the virus continues circulating in Canada.

"Less than 10 people were at this home," Henry said. "Unfortunately, somebody unknowingly brought COVID-19."

Officials said the majority of people at the birthday caught the disease, including a woman in her 80s who later died in hospital.

"I know her family and the care teams and the community mourn her, as we do as well," Henry said.

The latest fatality pushed the provincial death toll to 262, while the new infections put the total number of cases identified locally since the start of the pandemic at 14,109.

The province's active caseload also reached a new record high of 2,344. The number of people in hospital decreased by one, to 84, with 24 patients in intensive care or critical care units.

The update marked the ninth day in a row that B.C. recorded upwards of 200 cases. Prior to Oct. 21, the province had never identified that many in a 24-hour period.

While Henry usually addresses B.C. residents from the provincial capital, Thursday's briefing was held in Surrey, in the heart of the Fraser Health region, where many of the province's recent COVID-19 cases have originated.

"We are here because in recent weeks, COVID-19 has been disproportionately affecting communities in the Fraser Valley," Henry said. "And we know that many people in this community are our essential workers who have kept our province going over this pandemic, whether it's in health care, long-term care, schools, agriculture, (or our) processing plants."

Given the alarming increase, officials have asked Fraser Health residents to avoid having any guests over at their homes, and to instead socialize outside or in COVID-safe businesses whenever possible.

The request goes even further than the provincial health order issued by Henry earlier this week, which requires people across the province to have no more than their "safe six" guests over.

Officials also announced four more outbreaks in the health care system. Two of them – The Gateway Assisted Living for Seniors and Mayfair Terrace Retirement Residence – are in the Fraser Health region, while Lakeview Care CEntre and the Louis Brier Home and Hospital are in Vancouver.

"In three of the four cases it's been a single health care worker that was identified early," said Henry, who described the early detection as a reflection of the important work done by public health teams.

One outbreak, at Zion Park Manor, was declared over, leaving 25 active outbreaks in B.C.'s health-care system, including one in an acute care unit.

Officials said 204 people recovered from COVID-19 since their last update, and that they were actively monitoring 5,714 people who were exposed to the known cases.

'Social events and gatherings' linked to most cases in new COVID-19 cluster in B.C. Interior