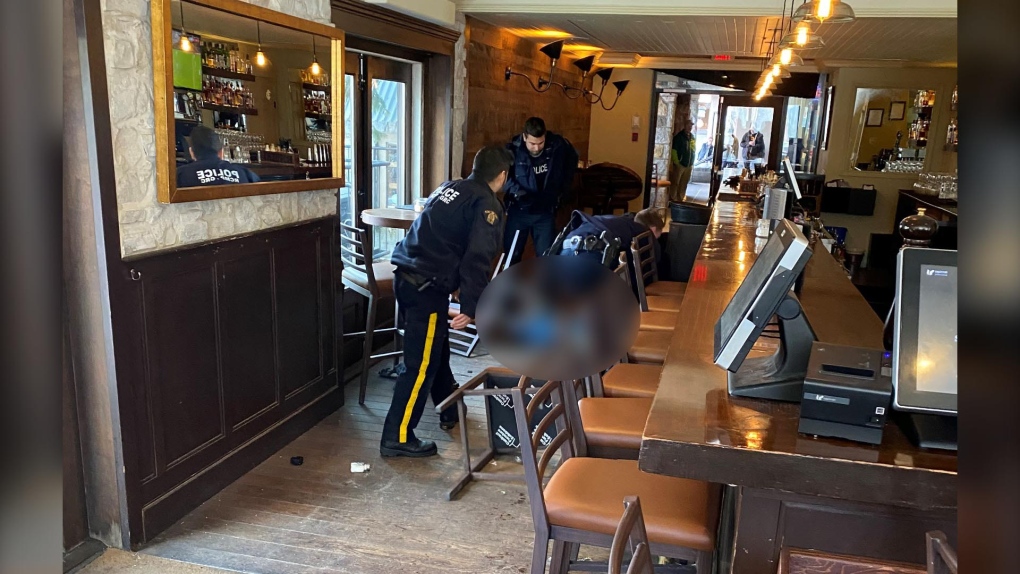 The Independent Investigations Office of B.C. said RCMP notified it of the incident on March 8, 2020, saying police were called to Whistler Village around 11 a.m. to respond to the man. (Photo courtesy: James Woodworth)

VANCOUVER -- Warning: This story contains an image that some readers might find disturbing.

British Columbia's police watchdog has been called to investigate an incident that led to the death of an intoxicated man in Whistler Sunday morning.

In a news release, the Independent Investigations Office of B.C. said RCMP notified it of the incident Sunday, saying police were called to Whistler Village around 11 a.m. to respond to the man.

Police used both pepper spray and a "conducted energy weapon" against the man, who went into medical distress and later died, the IIO said.

Woodworth stopped recording before police used their Tasers on the man, but says they used the energy weapons at least three times before the man fell to the ground.

"There was a lot of punches thrown by two different officers that I could see, and another officer using a baton," Woodworth said.

In their own release on the incident, BC RCMP said officers were called to the scene for reports that the man was causing a disturbance.

After officers used the pepper spray, the Taser and their batons on him, "the male suddenly became still and officers began CPR and called emergency health services," police said.

Three officers were treated at hospital for minor injuries before being released, according to RCMP.

"As the incident took place in a public space there will have been numerous witnesses," police said. "They are asked to identify themselves to the IIO BC as soon as possible so that they may provide a statement."

Earlier on Sunday, the IIO confirmed in an email to CTV News Vancouver that it had been notified of the incident, but did not describe the nature of what happened.

The IIO is tasked with investigating incidents involving police officers in British Columbia that result in death or serious harm. It will be investigating this incident to determine what role, if any, the officers' actions or inactions played in the man's death.

The BC Coroners Service is also investigating "to determine how, where, when and by what means" the man died, the IIO said.

BC Emergency Health Services told CTV News Vancouver it had responded to a call in Whistler around 11:20 a.m., sending two ambulance crews and transporting one patient to hospital.

EHS said it could not confirm the patient's condition or the source of their injuries, but referred questions to the RCMP.

Whistler Fire Rescue Service also acknowledged responding to a call and referred questions on the details of the incident to police.