B.C. highway blocked by rock slide not expected to open for days; no detour 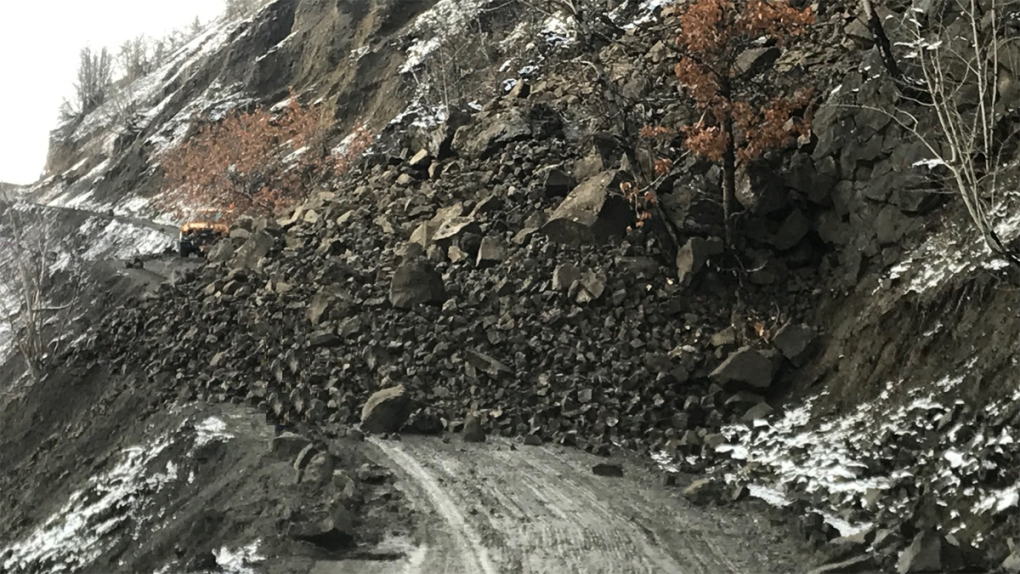 A photo from the Ministry of Transportation and Infrastructure shows a rock slide blocking a northern B.C. highway on Tuesday, Nov. 5, 2019.

VANCOUVER - A stretch of northern B.C. highway blocked by a rock slide earlier this week isn't expected to re-open until Sunday.

The slide happened Tuesday morning on Highway 51, in a remote section about 20 kilometres east of Telegraph Creek.

Images posted online by B.C.'s Ministry of Transportation and Infrastructure show a large pile of rocks and other debris completely blocking the highway also known as Telegraph Creek Road.

The slide occurred between Glenora Road and the Tahltan River Bridge.

The ministry said no injuries were reported, but the road was closed and there were no detours available.

It remained closed Wednesday, and an update Thursday morning said the estimated time of re-opening was Sunday afternoon.

A geotechnical assessment was conducted, and debris is now being removed. However, work can only be done during daylight hours for safety reasons, the ministry said in an update on its DriveBC website.

The forecast for the closest Environment Canada Weather station, in Dease Lake, showed a high around the freezing mark Thursday, though it was -4 C at noon. The weekend will be sunny, but the high is expected to be between -11 and -14.

Removal of rock slide debris continues on #BCHwy51 #TelegraphCreek Road. Can only work during daylight hours due to site challenges. Estimated time of re-opening is Sunday afternoon. @DriveBC of updates: https://t.co/s6Rutn10jQ pic.twitter.com/OJhaJY4NZj