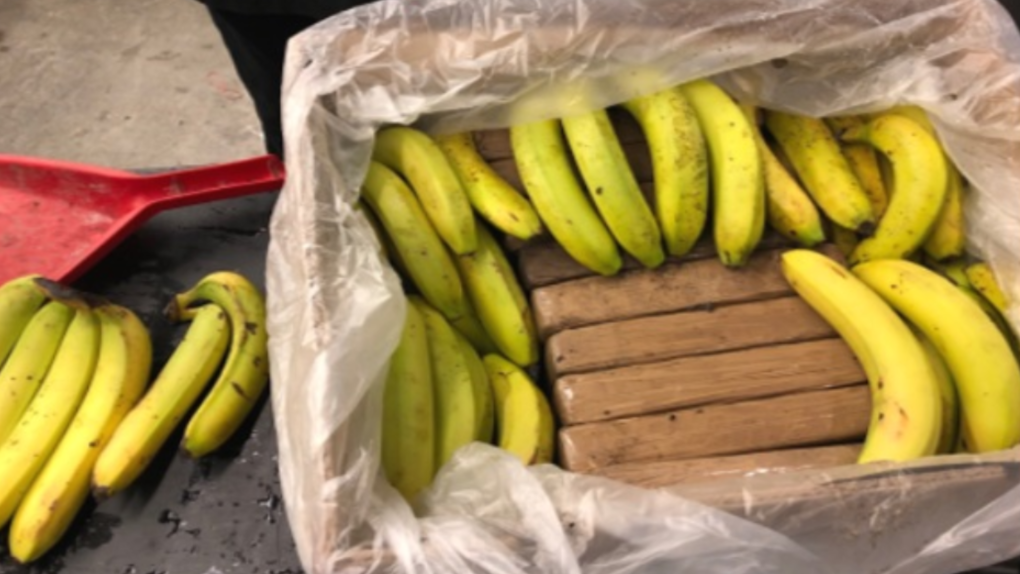 Bricks of what turned out to be cocaine are shown in a shipment of bananas. (Kelowna and West Kelowna RCMP)

VANCOUVER -- Officials are sharing details on an investigation nearly two years after B.C. grocers uncovered cocaine in their banana shipments.

In a news release Tuesday, Mounties in Kelowna outlined an investigation that began on Feb. 24, 2019.

Members of the RCMP detachment in B.C.'s Okanagan said they were called to an unidentified grocery store that day, after someone unpacking crates of bananas found something else inside: "12 large bricks" of what appeared to be cocaine.

Mounties seized the packages, and began to investigate where the products came from, and where they were supposed to end up.

On the same day, Mounties in nearby West Kelowna were called by another grocer who'd made a similar discovery, they said.

Officers said they seized another nine packages, which were individually wrapped and weighed about a kilogram each.

The bricks were analyzed and found to contain cocaine, the RCMP said.

"Our investigation leads us to believe these illicit drugs were not meant to end up in the Central Okanagan, and arrived here in the Okanagan Valley as a result of a missed pickup at some point along the way," said Cpl. Jeff Carroll of the Kelowna RCMP's drug section in Tuesday's statement.

According to the detachment, the amount of nearly pure cocaine contained in the shipments could have amounted to as many as 800,000 doses of crack cocaine once cut with other substances.

"That's enough contraband for every resident in the City of Kelowna to receive nearly six doses each," the RCMP said.

When asked why the information was only coming to light two years later, the RCMP said it took Mounties and CBSA "quite a while" to trace the shipments to their source country, and to look into whether the intended receiver was in the area.