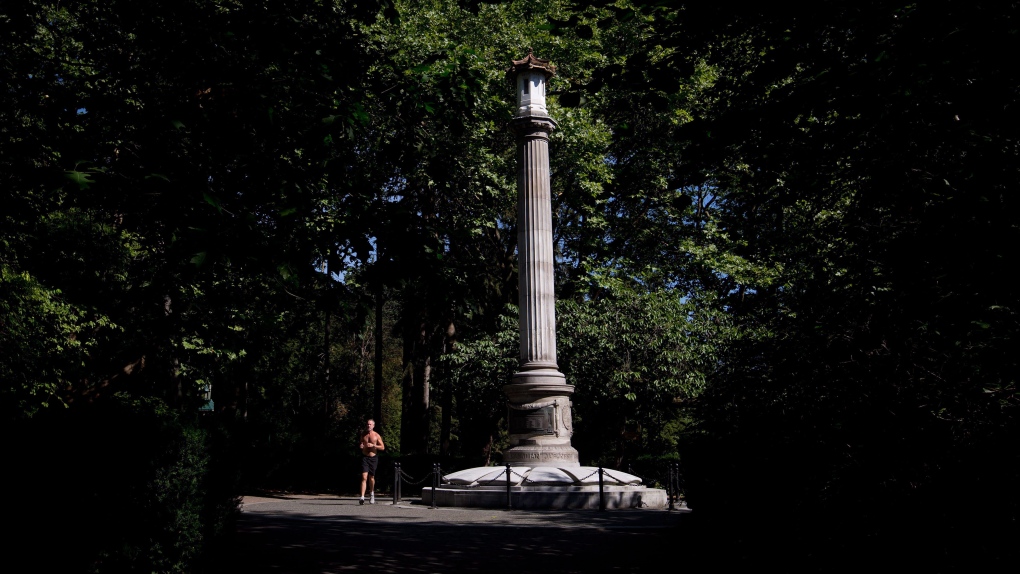 A man jogs past the Japanese Canadian War Memorial in Stanley Park in Vancouver, B.C., on Tuesday, Aug. 5, 2014. (Darryl Dyck / THE CANADIAN PRESS)

VICTORIA -- British Columbia is offering tangible recognition of the historical wrongs caused by the province when it helped to intern thousands of Japanese Canadians during the Second World War.

The province has announced a $2-million fund for the Nikkei Seniors Health Care and Housing Society to enhance programming for seniors and local communities.

A statement from the Ministry of Attorney General says the fund will be used to develop and deliver health and wellness programs to Japanese Canadian internment survivors.

The society and the National Association of Japanese Canadians will also spread the funding to other organizations supporting survivors.

The ministry statement says the grant is a first step toward fulfilling a provincial promise to honour Japanese Canadians by recognizing the traumatic internment of almost 22,000 people beginning in 1942.

Health Minister Adrian Dix says the funding will allow internment survivors to connect with others in their community, helping them stay healthy and remain independent.

“The terrible loss suffered by thousands of Japanese Canadians in the 1940s is still impacting the community today, with many experiencing lasting health issues and trauma,” Dix says in the statement.

The Canadian government detained thousands of Japanese Canadians in early 1942 under the War Measures Act. They were held in crowded internment camps in B.C.'s Interior or were offered the option to work on sugar beet farms in Alberta and Manitoba for the remainder of the Second World War.

Their homes, farms, businesses and other property were sold off by the government and the proceeds were used to pay the cost of their detention.

Ruth Coles, president of the Nikkei Seniors Health Care and Housing Society, says many Japanese Canadian seniors were forced to rebuild their lives outside B.C. and now have “unique needs stemming from internment, forced uprooting, dispossession and displacement.”

Many still feel “shame and a lack of resolution” caused by the internment that have led to a lifetime of challenges, she says.

Then-prime minister Brian Mulroney formally apologized in 1988 for Canada's role in the internment of Japanese Canadians and British Columbia recognized the discrimination and tremendous losses they suffered when it issued its own apology in the legislature in 2012.

This report by The Canadian Press was first published May 5, 2021.