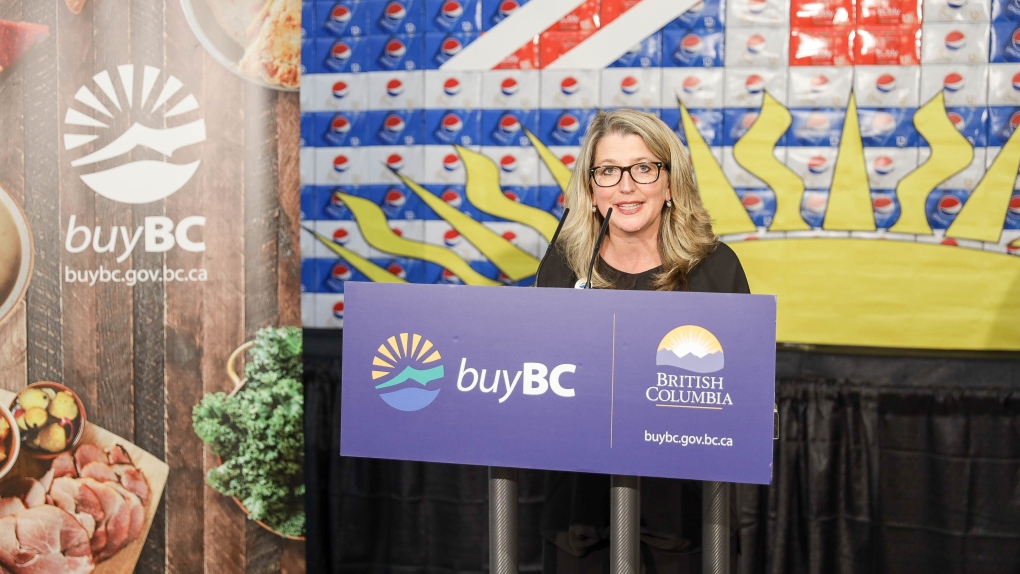 B.C. Minister of Agriculture Lana Popham speaks about the Buy BC program at a Safeway store on Robson Street in Vancouver in September 2019 (Ministry of Agriculture/Flickr)

VANCOUVER -- 2018 was a banner year for agriculture in British Columbia, according to data released by the provincial government Friday.

Food producers in B.C. generated more than $15 billion in total revenue last year, the first time the sector has ever topped that amount, according to the provincial Ministry of Agriculture.

The largest share of that revenue - some $6.4 billion - was generated through sales to consumers within B.C. Another $4.5 billion was exported to other countries, with the United States accounting for the vast majority of international sales of B.C. food products.

The rest of the revenue generated - a total of roughly $4 billion - came from sales in other Canadian provinces and territories.

“It was an excellent year for agriculture in British Columbia," said Minister of Agriculture Lana Popham in her ministry's news release. "The hard work of many has led to record results."

A total of 63,400 people worked in food production in the province in 2018, according to the ministry. That's an increase of 2,300 jobs compared to the previous year.

These numbers may conjure up images of fresh fruits and vegetables grown by B.C. farmers, but it's notable that the vast majority of the total revenue the sector generated came from "food and beverage processing," rather than agriculture or seafood.

More than $10 billion of the $15 billion total came from this subcategory, compared to $3.5 billion from agriculture and $1.3 billion from seafood.

The top agricultural product for in-province sales was alcohol. British Columbians bought more than $1 billion worth of B.C. wine, beer and spirits in 2018, more than they paid for meat, grain, dairy, seafood or produce from their home province.

After the United States, the most common destinations for B.C. food products were China, Japan, South Korea and Hong Kong.