The sobering update from provincial health officer Dr. Bonnie Henry and B.C. Health Minister Adrian Dix was delivered in the midst of a surging caseload in the province, driven in large part by younger people attending parties and events without taking proper precautions.

While British Columbia has enjoyed significant success combatting the spread of the virus in recent months, sometimes to the envy of other jurisdictions, Henry said the latest dynamic compartmental modelling projections show the province is "starting to see an upward bend of our curve."

"What this shows is that we do have a possibility of having explosive growth in our outbreak here in B.C. if we're not careful in how we progress over the summer," she added.

The projections offer a glimpse at what the province could experience going forward, depending on how much contact residents have with one another. Officials have said they believe B.C. can maintain a manageable caseload if the public keeps their contact rate at 60 to 65 per cent of the pre-pandemic normal. 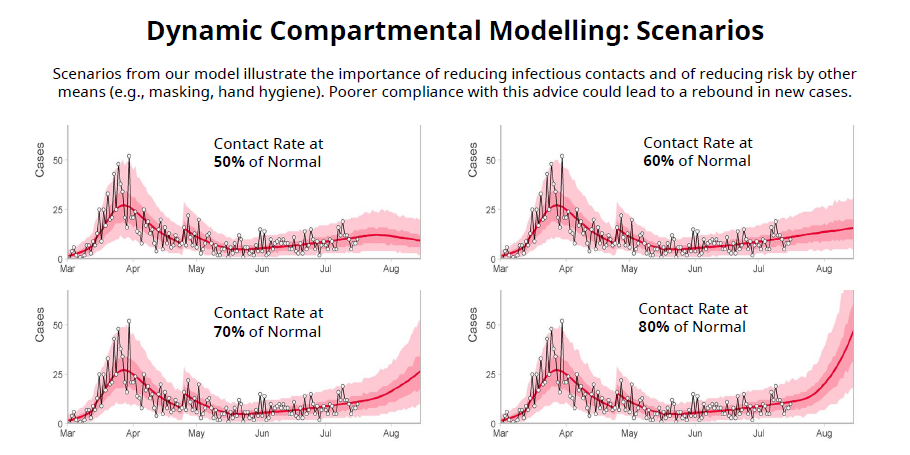 There are signs that some are already pushing the limits, however.

In the early weeks of the pandemic, up until March 15, public health investigators had to reach out to an average of 10.7 contacts for every person who caught the virus. That number plummeted to 3.6 by early June, but Henry said some of the latest cases identified in the province have had "a large number of contacts again."

"The challenge now is we're no longer having safe connections, and that is what is spreading this virus," the provincial health officer said. "We're seeing parties, small groups of people going together to restaurants and bars and clubs but also in houseboats, in resorts, at private homes. And the challenge with that is we may not know those people we're in close contact with."

Officials expected to see increased social connections as B.C. loosened some of its pandemic restrictions, Henry added, but the province's swelling caseload highlights the importance of doing so responsibly.

B.C. has recorded 102 new cases over the past three days, including 51 that were identified over a single 24-hour period – the largest daily jump in cases since May 26.

The province's active caseload – calculated by taking the total number of recorded cases and subtracting the number of recoveries and deaths – has also increased from 152 at the end of June to 254.

In addition, the latest modelling shows that the number of additional infections generated from each new case has increased to more than one, which is considered the "threshold for sustained growth in new cases."

"That is concerning because at one, we can stop the outbreak," Henry said. "We are at a place where we could see rapid progression of this virus if we're not careful." 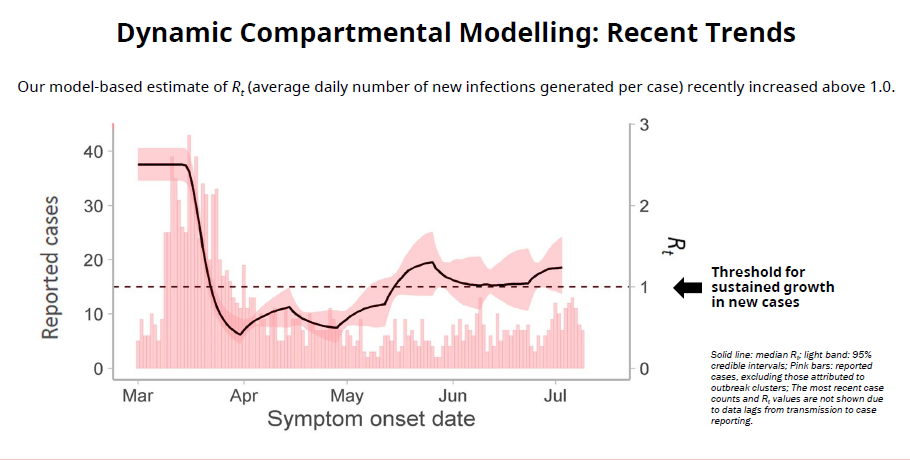 Fortunately, the number of hospitalizations, which is considered one of the most important metrics for measuring the severity of the pandemic in B.C., has remained relatively stable. There were 16 people in hospital as of Monday, including four in intensive care or critical care units.

The latest modelling data also shed new light on the devastating impact COVID-19 has had in the province's care homes. Outbreaks at those facilities resulted in a case fatality rate of roughly 20 per cent, meaning one in every five people infected succumbed to the virus.

"This is one of the reasons we have put so much time and energy trying to protect our long-term care homes and our elders and seniors in these situations," Henry said.

The fatality rate was even higher – at 22.4 per cent – in infections associated with hospital outbreaks in the province.

By comparison, the province's overall case fatality rate was 6.1 per cent, which is actually slightly lower than the national average of about eight per cent.

The 1,028 cases associated with outbreaks, including outbreaks in the community that spread through social events and workplaces, had an overall fatality rate of 12.9 per cent.

Officials said cases that weren't associated with an outbreak were significantly less lethal, accounting for 50 deaths out of 1,950 infections.

"So the case fatality rate is about 2.6 per cent – still much higher than we see with influenza, for example, but much lower than certain scenarios," Henry said.

Henry and Dix also shared the results of the province's COVID-19 population survey, which 10 per cent of B.C. residents participated in. While it indicates the vast majority of people are practicing preventive personal hygiene and avoiding gatherings, only two-thirds said they stay home when they feel sick.

Officials said that is a major issue that needs addressing, as keeping sick people away from others is fundamental in stopping the virus.

Nearly half of survey respondents reported experiencing worsening mental health during the pandemic, and nearly a third reported finding it harder to meet their financial needs.