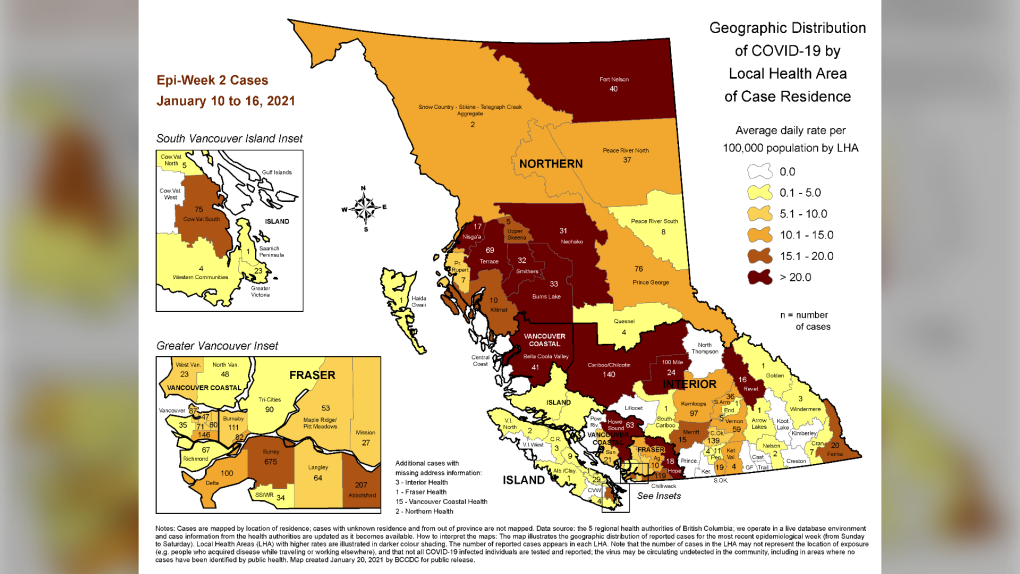 The latest map of COVID-19 infection data from the B.C. Centre for Disease Control shows high per-capita caseloads in some of the province's rural regions, while the Lower Mainland - long the epicentre of the pandemic in B.C. - sees a lower density of cases. (BCCDC)

VANCOUVER -- The latest map of COVID-19 infection data from the B.C. Centre for Disease Control shows high per-capita caseloads in some of the province's rural regions, while the Lower Mainland - long the epicentre of the pandemic in B.C. - sees a lower density of cases.

Released Thursday, the latest map shows infections detected during the week of Jan. 10 to 16 in each of the province's "local health areas."

For the first time since the BCCDC began releasing these maps on a weekly basis, the local health area that includes most of the City of Surrey is not coloured with the darkest shade of red on the map, indicating the highest number of cases per 100,000 residents.

Instead, the Surrey local health area recorded between 15 and 20 cases per 100,000 residents each day during the week in question. The region detected a total of 675 infections during the week, a significant decrease from the 925 recorded the week before.

No other region in Metro Vancouver recorded more than 15 cases of COVID-19 per 100,000 residents last week.

That said, several more rural regions of the province saw higher numbers of per-capita cases during the week that ended Jan. 16.

In the Vancouver Coastal Health region, the Howe Sound local health area recorded a total of 63 new cases during the period, while the Bella Coola Valley recorded 41. In both regions, those totals equate to more than 20 cases per 100,000 residents per day.

Likewise, the Fraser Health region's Hope local health area also recorded that level of coronavirus per capita, despite confirming only 18 total cases over the course of the week.

In their written statement on B.C.'s latest COVID-19 numbers Thursday, provincial health officer Dr. Bonnie Henry and Health Minister Adrian Dix said a "community cluster" had been detected in the Cariboo/Chilcotin region, "in and around Williams Lake."

Six local health areas in the Northern Health region were also above the 20-cases-per-100,000-residents threshold last week. Those regions are Nisga'a, Nechako, Smithers, Burns Lake, Fort Nelson and Terrace. They recorded 17, 31, 32, 33, 40 and 69 cases, respectively, during the time period.

On Vancouver Island, which on Thursday recorded its highest daily increase in COVID-19 infections since the pandemic began, the largest number of new cases has been recorded in the Cowichan Valley South local health area, according to the BCCDC map. The region added 75 infections between Jan. 10 and 16, equivalent to between 15 and 20 new cases per 100,000 residents each day.

The latest map of B.C.'s COVID-19 case data can be found here.