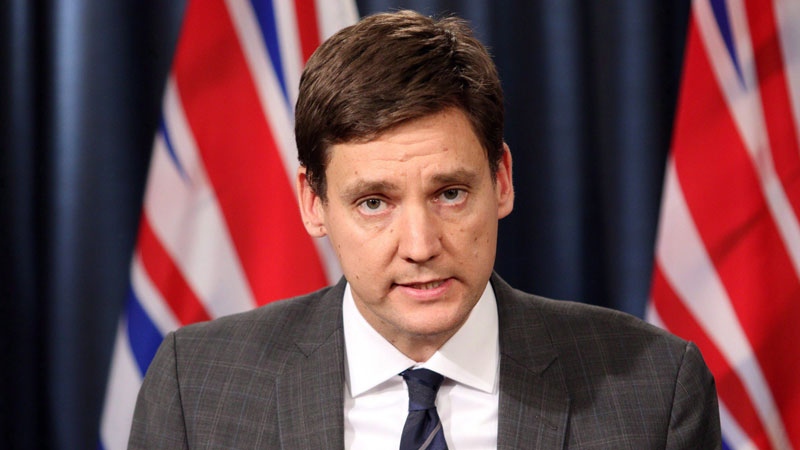 Attorney General David Eby speaks to media about the legislation announcement banning union and corporate donations to political parties during a press conference at Legislature in Victoria, B.C., on Monday, September 18, 2017. THE CANADIAN PRESS/Chad Hipolito

VANCOUVER -- Taxpayers are footing the bill to fly sheriffs around British Columbia as the province grapples with a chronic shortage of the courtroom staff and frustrated judges speak out about delayed and stayed cases.

Attorney General David Eby said the government is working to train more sheriffs to provide courtroom security while dealing with the problem of police forces luring recruits with higher pay.

"We have a very serious issue with a shortage of sheriffs in the province and we are currently flying some sheriffs from courthouse to courthouse to make sure we have enough sheriffs to keep courthouses open," Eby said in a recent interview. "It's obviously a significant public expense to do that."

Eby said part a $20 million NDP platform commitment has been earmarked to deal with the shortage, and he's concerned the issue could erode public confidence in the justice system.

Lack of sheriffs is a long-standing problem that surfaced under the previous Liberal government, Eby said, adding a low salary is one of the key retention issues.

"Many of them are being hired to work as police officers instead of staying on to work as sheriffs because of very significant pay disparity between working as a sheriff in court and being a police officer," he said.

"B.C. Sheriff Services members are located in each courthouse across the province to ensure the safety of court users while on court property and in courtrooms, including members of the public, witnesses, victims, the judiciary, legal counsel and parties," Crabtree said in a statement.

Dean Purdy, vice-president of Corrections and Sheriffs Services for the B.C. Government and Service Employees' Union, said 14 deputy sheriffs have left in the last four weeks and 90 per cent of them have been recruited by police forces.

"They're trying to plug holes where they can," he said of sheriffs who escort the accused from holding cells and provide security in courtrooms. "They're triaging the courts. They know which judges will squawk about not having security in their courtrooms and speak out and which judges won't."

The shortage of sheriffs has led to problems across the province and most recently on Vancouver Island, Purdy said. Two high-profile drug cases were among those thrown out in Victoria because a deputy sheriff wasn't available.

A trial delayed for hours last week in Victoria because there was no sheriff had a provincial court judge calling the situation "appalling."

"We're pleased to see that judges are speaking out about this issue because the security and the safety of the public and the courts and court staff is paramount," Purdy said.

There's a $36,000 gap between the top average salary of a sheriff and a police officer, and that has RCMP and municipal forces, along with transit police in the Vancouver area, "actively and aggressively recruiting both correctional officers and sheriffs," Purdy said.

"It costs approximately $30,000 to train a new recruit and it just doesn't make sense from a fiscal standpoint, and I know you certainly wouldn't run a business that way, to pay for new recruits to be trained, bring them in, only to have them leave, sometimes months later," he said.

"We're not saying that both corrections and sheriffs need to be paid the same as police, because they're not police, but they need to close that gap about half way just so they can retain good, highly trained sheriffs and correctional officers because they'll continue to leave as long as that incentive of a significantly higher wage is right there in their sight."

Sheriffs are required to pay back $11,000 of the training cost if they leave in the first two years of their job, Purdy said.

Union representatives are scheduled to meet with Eby on Oct. 17, the second meeting with the new attorney general since last month, he said.

Bentley Doyle, spokesman for the Trial Lawyers Association of B.C., said limited court time is wasted when trials don't go ahead because a sheriff isn't available.

"In that sense, sheriffs and judges are equally important, as both are required in order to make the system run," he said in an email statement.

"There are too many cases in need of trial time. Courtrooms cannot be dark during the workweek. Justice delayed far too often ends up being tantamount to justice denied."