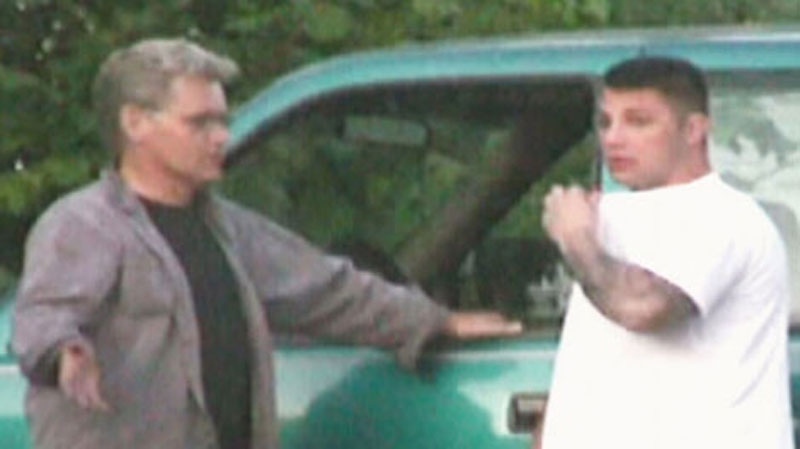 Wayne Scott, left, and Jarrod Bacon are seen in this undated image. (CTV)

VANCOUVER -- The B.C. Court of Appeal has added two years to the drug trafficking sentence of one of three notorious brothers with links to the province's violent gang world.

Jarrod Bacon's sentence has been revised to 14 years, instead of the 12 he received earlier this year for conspiring to import cocaine into Canada from Mexico.

Bacon is one of three brothers who were linked to a bloody gang war in the Vancouver area that saw dozens of shootings, many of them fatal, in 2008 and 2009.

Bacon and his co-accused, Wayne Scott, were charged following a sting involving a police informant who promised to sell Bacon 100 kilograms of cocaine for $3 million.

Scott, who insisted he was merely a go-between connecting Bacon with another associate, was sentenced to three-and-a-half years.

An appeal by the Crown to have Scott's sentence increased was rejected by the court.

The Crown argued in its appeal that Bacon's sentence was too lenient and should be replaced by a sentence of 20 years.

While Bacon was convicted of trafficking cocaine, the Crown urged the trial judge to consider a sentence more in line with drug importation, since that was the goal of Bacon's plan, but the judge disagreed.

The lower court judge also suggested the fact that there was no actual cocaine, because it was really a police sting, was a mitigating factor.

The Crown appealed, arguing the judge was wrong on both of those points.

In a split 2-1 decision released Thursday, the B.C. Court of Appeal agreed the trial judge was wrong.

"In my view, the judge erred in concluding it was not appropriate to take into account importing cases," wrote Justice Edward Chiasson.

"They reflect the participation of offenders in operations comparable to that in the present case."

As for the lack of any real cocaine, Chiasson wrote: "The crime is in the agreement (to traffic cocaine). While an accused's knowledge of impossibility might go to whether an agreement was made, I question whether the fact it was impossible to commit the crime is otherwise relevant."

Bacon was on bail for weapons charges when he was arrested for the drug conspiracy. He was later acquitted in the weapons case.

When he was sentenced, he received almost five years of credit for time already served.

At the time, that meant he had a little more than seven years remaining on his sentence. The Appeal Court decision adds an additional two years on top of that.

Bacon is one of three brothers linked to B.C.'s violent gang war.

Jonathan Bacon was killed in a shootout in Kelowna, B.C., in 2011, and Jamie Bacon is currently awaiting trial in connection with the murders of six people, including two innocent bystanders, in Surrey in 2007.

That sentiment was echoed in the Appeal Court decision.

"The operation was sizeable, well-developed and reasonably sophisticated," wrote Chiasson. "The appellant is a career criminal."