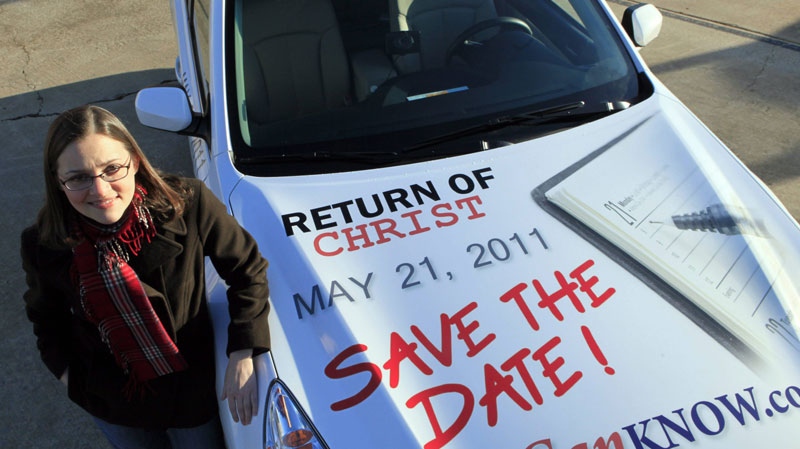 FILE - In this Dec. 17, 2010 file photo, Allison Warden poses with her car in Raleigh, N.C., showing a message about the rapture. Warden has been helping organize a campaign using billboards, post cards and other media in cities across the U.S. through the website We Can Know. (AP Photo/Gerry Broome, File)

Some shut themselves inside to pray for mercy as they waited for the world's end.

Others met for tearful last lunches with their children, and prepared to leave behind homes and pets as they were swept up to heaven.

And across the globe, followers of a California preacher's long-publicized message that Judgment Day would arrive Saturday turned to the Bible, the book they believe predicts the beginning of Earth's destruction on May 21.

The doomsday message has been sent far and wide via broadcasts and websites by Harold Camping, an 89-year-old retired civil engineer who has built a multi-million-dollar non-profit ministry based on his apocalyptic prediction.

After spending months travelling the country to put up Judgment Day billboards and hand out Bible tracts, Camping follower Michael Garcia planned to spend Friday evening with his family at home in Alameda, near the Christian media empire's Oakland headquarters.

They believe it will likely start as it becomes 6 p.m. in the world's various time zones.

"We know the end will begin in New Zealand and will follow the sun and roll on from there," said Garcia, a 39-year-old father of six. "That's why God raised up all the technology and the satellites so everyone can see it happen at the same time."

The Internet was alive with reaction in the hours past 6 p.m. Saturday in New Zealand.

"If this whole end-of-the-world thingy is still going on ... it's already past 6.00 in New Zealand and the world hasn't ended," said another.

Camping's radio stations, TV channels, satellite broadcasts and website are controlled from a humble building on the road to the Oakland International Airport, sandwiched between an auto shop and a palm reader. Family Radio International's message has been broadcast in 61 languages.

Camping, however, will be awaiting Jesus Christ's return for the second time. He said his earlier apocalyptic prediction in 1994 didn't come true because of a mathematical error.

"I'm not embarrassed about it. It was just the fact that it was premature," he told The Associated Press last month. But this time, he said, "there is...no possibility that it will not happen."

Skeptics are planning Rapture-themed parties to celebrate what hosts expect will be the failure of the world to come to an end.

Bars and restaurants from Melbourne, Australia to the Florida Keys advertised bashes.

In Oakland, atheists planned a gathering at a local Masonic temple to include group discussions on "The Great Success of Past Apocalypses," followed by dinner and music.

Camping and his followers believe the beginning of the end will come on May 21, exactly 7,000 years since the flood in the biblical story of Noah's Ark.

Some 200 million people will be saved, Camping preaches, and those left behind will die in earthquakes, plagues, and other calamities until Earth is consumed by a fireball on October 21.

In the Philippines, a big billboard of Family Radio ministry in Manila warned of Judgment Day. Earlier this month, group members there distributed leaflets to motorists and carried placards warning of the end of the world.

Christian leaders from across the spectrum have widely dismissed the prophecy, but one local church is concerned that Camping's followers could slip into a deep depression come Sunday.

Pastor Jacob Denys of Milpitas-based Calvary Bible Church plans to wait outside the non-profit's headquarters on Saturday afternoon, hoping to counsel believers who may be disillusioned if the Rapture does not occur.

"The cold, hard reality is going to hit them that they did this, and it was false and they basically emptied out everything to follow a false teacher," he said. "We're not all about doom and gloom. Our message is a message of salvation and of hope."

On Friday afternoon, a small group of eccentrics, gawkers and media opportunists convened outside Family Radio's closed office building. A sign posted on the front door said "SORRY WE MISSED YOU!"

As May 21 drew nearer, followers say donations grew, allowing Family Radio to spend millions of dollars on more than 5,000 billboards and 20 recreational vehicles plastered with the doomsday message. In 2009, the non-profit reported in IRS filings that it received $18.3 million in donations, and had assets of more than $104 million, including $34 million in stocks or other publicly traded securities.

Marie Exley, who helped put up apocalypse-themed billboards in Israel, Jordan and Lebanon, said the money helped the non-profit save as many souls as possible.

She said she and her husband, mother and brother were glued to the television on Friday night waiting for news of an earthquake in the southern hemisphere. When that did not happen, she said fellow believers began reaching out to reassure each other of their faith in the prophecy.

"Some people were saying it was going to be an earthquake at that specific time in New Zealand and be a rolling judgment, but God is keeping us in our place and saying you may know the day but you don't know the hour," she said Saturday, speaking from Bozeman, Montana. "The day is not over, it's just the morning, and we have to endure until the end."

Camping recommended this week that followers surround themselves by their loved ones and not meet publicly, Exley said.

Some people wanted to make sure their pets receive good treatment, no matter what happens.

Sharon Moss, who founded AfterTheRapturePetCare.com to provide post-apocalypse animal care, said a new wave of customers has paid $10 to sign up in the last few weeks.

"A lot of people have said you should be out there saving souls not saving pets but my heart says 'why can't you do both?"' said Moss, who identifies herself as Protestant.