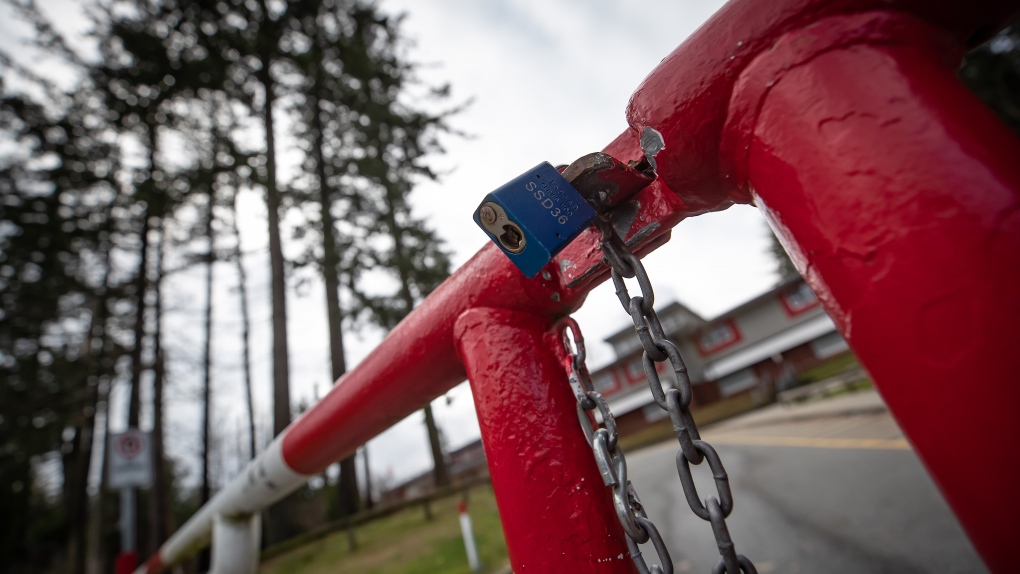 A padlocked gate is seen outside Cambridge Elementary School, which was ordered closed for two weeks by Fraser Health due to a COVID-19 outbreak, in Surrey, B.C., on Sunday, Nov. 15, 2020. (Darryl Dyck / THE CANADIAN PRESS)

VANCOUVER -- At least two in five schools in B.C.'s Lower Mainland have recorded exposures to COVID-19 this school year.

As of Tuesday morning, CTV News Vancouver's list of schools with exposures had reached 403.

With a total of 974 public and private schools in the region's two health authorities, Vancouver Coastal and Fraser Health, that number equates to 41 per cent.

While it's a startling figure, there have been very few actual transmissions tied to these exposures. Read more below on "perspective."

However, the total number of schools with exposures may be higher. CTV News has been keeping track of schools posted to the health authorities' websites, as well as those identified in letters sent to CTV by parents at those schools, but initially, not all exposures were publicly reported.

Earlier this school year, Vancouver Coastal Health was sending notifications to parents, but not listing publicly the schools that had seen possible exposures.

According to the Ministry of Education, there are 260 public and 100 independent schools within the Vancouver Coastal Health region.

The region has been one of B.C.'s hardest hit by COVID-19, second only to Fraser Health.

Looking only at the schools with exposures in Vancouver Coastal Health, which again may be higher as some were not made public, there are 123.

Given the data available, there have been exposures reported at at least 34 per cent of schools in VCH.

In Fraser Health, which has seen more cases than any other region in the province, where there are 614 schools, 280 of which have publicly disclosed exposures. This is about 46 per cent.

'Perspective' on COVID at school

B.C.'s provincial health officer is often questioned by journalists, on behalf of parents and teachers, why schools remain open, and why the mask mandate doesn't apply to the classroom.

Dr. Bonnie Henry has addressed it several times, including in October, when the province experienced its first outbreak at a school.

Speaking on Oct. 22, the doctor said she wanted to provide some "perspective" on the outbreak at Ecole de L'Anse-au-sable in Kelowna, and pointed to the number of exposures at the time (213) versus outbreaks (one). See below for health officials' definitions of these terms.

It should not be a surprise that Surrey, for example, has seen several exposure events at schools, because there have been so many cases in the city. According to Fraser Health data, there have been exposures at 110 Surrey independent and public schools.

She was asked again at her most recent news conference, given that many parents planned to keep kids home "sick" on Tuesday as part of a protest against current safety protocols.

Henry said she hadn't heard about the "Sick Out," but reiterated how few people have gotten sick through B.C. schools.

"They have very rarely, really, resulted in transmission, particularly from children to anyone," she said.

However, she did say that she felt health officials should learn from what they've been seeing in the last few months, making sure communication is ongoing and parents are involved in discussions.

A "cluster" means two or more people were at school while infectious. These cases may or may not be linked to school-based transmission, according to public health officials.

In each case, Fraser Health says, public health officials will interview the person confirmed to have the novel coronavirus and conduct contact tracing.

If the above map is not loading, or is too small, you can view a full-screen version here.