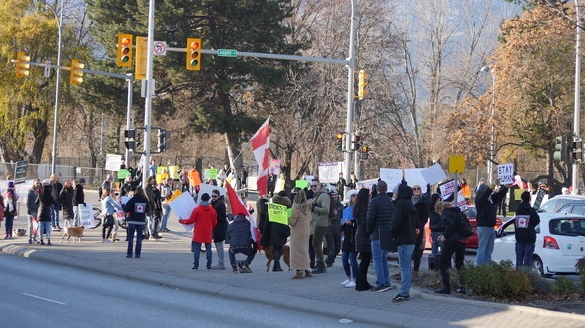 A file photo of an anti-lockdown protest in Kelowna, B.C. on Nov. 28, 2020 (Nicholas Johansen/Castanet News).

VANCOUVER -- Police have fined the organizer of the anti-lockdown protest that took place in Kelowna, B.C.

Weekly protests over COVID-19 have been taking place at Kelowna's Stuart Park for many months, led and organized by David Lindsay, according to Castanet News. However, police have refused to identify the person they fined $2,300.

“The organizer of today’s protest has been issued a fine for being in contravention of the provincial Public Health Orders,” reads the news statement from Kelowna RCMP’s Cpl. Jocelyn Noseworthy.

RCMP said it recognizes that residents have “a democratic right to a lawful and peaceful protest” and that officers must “use discretion” when balancing these rights “with the current potential health risks associated to large public gatherings.”

“If the activities being engaged in are in violation of the provincial Public Health Orders, those involved can face fines,” continues the statement.

The protest moved throughout the downtown area, stopping in parks and other locations, say RCMP.

Lindsay received a $2,300 fine last month for organizing a rally in Stuart Park, but said he would fight the citation in court.

“Public safety is a priority for the RCMP and we encourage everyone to adhere to the orders being implemented to keep everyone safe and reduce the risks. These orders are not optional,” said Supt. Kara Triance, in the news statement.

“While we will continue to enforce the provisions available to us, we encourage everyone to voluntarily comply with the provincial health orders, so enforcement is not required,” she continued.

The second $2,300 fine comes a day after Kelowna mayor Colin Basran released a statement expressing frustration about the planned protest.