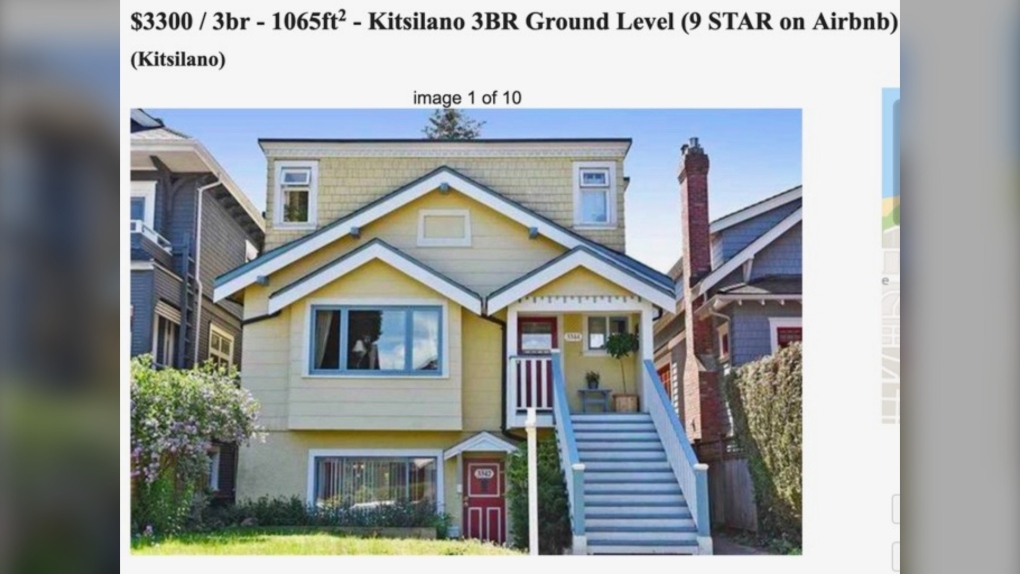 VANCOUVER -- Airbnb Canada has asked the federal government for a series of tax breaks to help short-term rental hosts make up lost income from cancelled bookings during the COVID-19 crisis.

But one Vancouver resident who has spent years advocating for stricter rules to curb short-term rentals says Canadian taxpayers shouldn’t bail out Airbnb hosts. Instead, said Ulrike Rodrigues, hosts who are no longer getting Airbnb bookings should put their units on the long-term rental market.

“What’s evident around the world … is that Airbnb operators are not getting business during this period,” Rodrigues said. “Some of them are entertaining the idea of offering to local residents instead of tourists.”

· GST/HST credits on business expenses hosts pay when they short-term rent their properties;

· a reduction on income tax;

· allowing hosts to get EI benefits;

In her letter, Dagg said Airbnb hosts are helping with the pandemic by providing space for people to quarantine themselves away from family members. She also said many hosts use short-term rentals to help cover mortgage payments or rent.

"We are concerned about the everyday people who depend on travel and tourism for their livelihood,” said Dagg in a statement emailed to CTV News Vancouver. “We identified measures to support these entrepreneurs and welcomed conversation on these or other measures to financially support Canadian short-term rental operators, travel industry solo-entrepreneurs and small businesses during this time of crisis and recovery."

Rodrigues lives in a condo building where several units have been listed on Airbnb over the past five years, and she’s alarmed that short-term rental hosts could be in line for a government bailout.

While the City of Vancouver introduced new rules to both allow and regulate short-term rentals two years ago, Rodrigues said sites like Inside Airbnb show many hosts are still listing multiple properties, despite Vancouver regulations that say people can only short-term rent their principal residence.

Vancouver continues to have the highest average rents in the country, while British Columbia has the highest rate of evictions in Canada, according to Statistics Canada

When it comes to who needs assistance, Airbnb hosts should be far down the line for taxpayer-funded help, said Andy Yan, the director of Simon Fraser University’s City Program.

“Renters in the Metro Vancouver area have had some of the greatest levels of precarity, before COVID-19,” Yan told CTV News Vancouver. “And after COVID, it’s not just the question of paying rent, it’s also loss of income.”

The B.C. government has rolled out a $500 rent supplement, and has frozen rents and banned evictions, in an effort to help renters weather the widespread job losses caused by measures aimed at containing COVID-19. The federal government has also introduced a number of extra benefits, including for workers like freelancers who are not eligible for employment insurance.

“Everybody is hurting, period. It’s not just Airbnb hosts, it’s everybody,” Yan said. “What makes Airbnb special? What makes Airbnb a priority in the discussion of relief? That’s not something I see in that letter.”

Rodrigues said she’s already seeing signs that Airbnb hosts are turning to the long-term rental market to make up for the lost income. She pointed to several rental listings on sites like Craigslist and Padmapper.

For instance, a three-bedroom suite in a house in Kitsilano – listed for $3,300 a month – boasts, “this was a nine-star Airbnb residence.” Another — a two-bedroom suite for $2,200 a month — says the unit “has been an Airbnb for the past 6 months and has a five out of five star rating.”

More than half of Canadians think there's no way to avoid Omicron infection, says poll