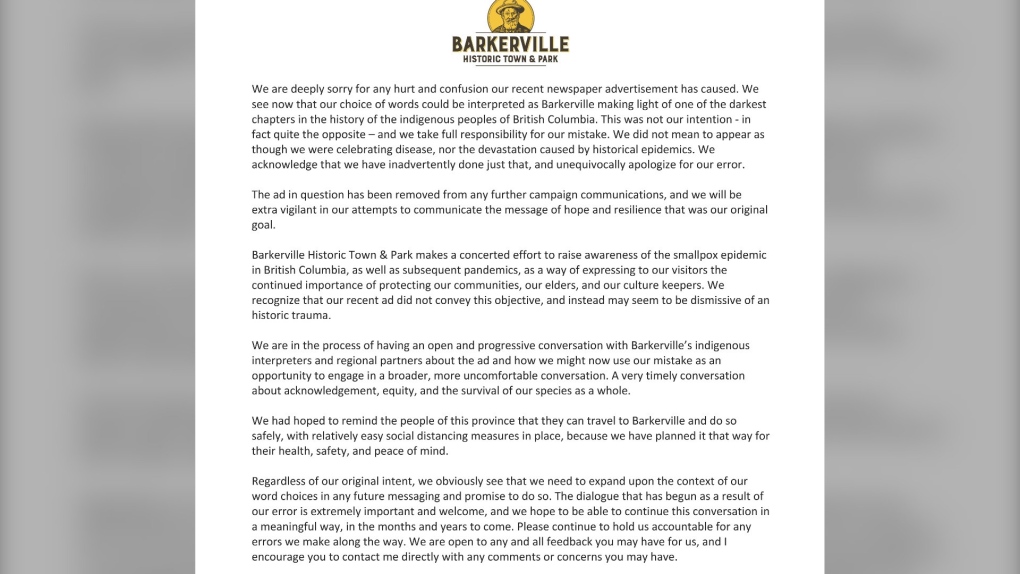 VANCOUVER -- A B.C. tourist attraction issued an apology over the weekend following an ad some felt made light of the impact of past pandemics on the province's Indigenous people.

Barkerville Historic Town and Park, an area that drew hopefuls during the gold rush, posted an online apology Saturday over a newspaper ad.

A photo of the full-page ad, posted online by Twitter user Joanne Hammond, showed that it featured the tag line "Surviving pandemics since 1862."

Calling it a "bad ad," Hammond wrote, "In 1862-3, a smallpox epidemic spread by miners bound for the Cariboo (region) killed over 60 per cent of Indigenous people in B.C., making way for settlement and exploitation of unceded lands that continues today… Indigenous death is not a marketing ploy."

The day after being called out online, Barkerville posted a written apology, saying staff "made a mistake" and thanking Hammond for highlighting it.

"We see now that our choice of words could be interpreted as Barkerville making light of one of the darkest chapters in the history of Indigenous peoples of British Columbia," the letter signed by CEO Kate Cox read.

"This was not our intention – in fact quite the opposite – and we take full responsibility for our mistake. We did not mean to appear as though we were celebrating disease, nor the devastation caused by historical epidemics. We acknowledge that we have inadvertently done just that, and unequivocally apologize for our error."

Cox said the ad's been removed from future campaign communications, and that they'll find another way to communicate "the message of hope and resilience that was our original goal."

She said the site is also "in the process" of having a conversation with Barkerville's Indigenous interpreters and regional partners about the ad, and how it can be used to spark a larger, timely conversation.

"The dialogue that has begun as a result of our error is extremely important and welcome… Please continue to hold us accountable for any errors we make along the way," Cox wrote.

Barkerville was declared a National Historic Site of Canada in 1924, and a Provincial Heritage Property in 1958, the park's website says.

In 1862-3, a smallpox epidemic spread by miners bound for the Cariboo killed over 60% of Indigenous people in BC, making way for settlement and exploitation of unceded lands that continues today. This is a bad ad, @BarkervilleBC, Indigenous death is not a marketing ploy. #bchist pic.twitter.com/HacioKXyB7

Please see the attached acknowledgment and apology from @BarkervilleBC. We made a mistake, and appreciate you letting us know how you feel about it. https://t.co/6pmqns5N54 pic.twitter.com/CK4qInS2Ht