Across generations of military service, family meets every year to march in Remembrance Day parade 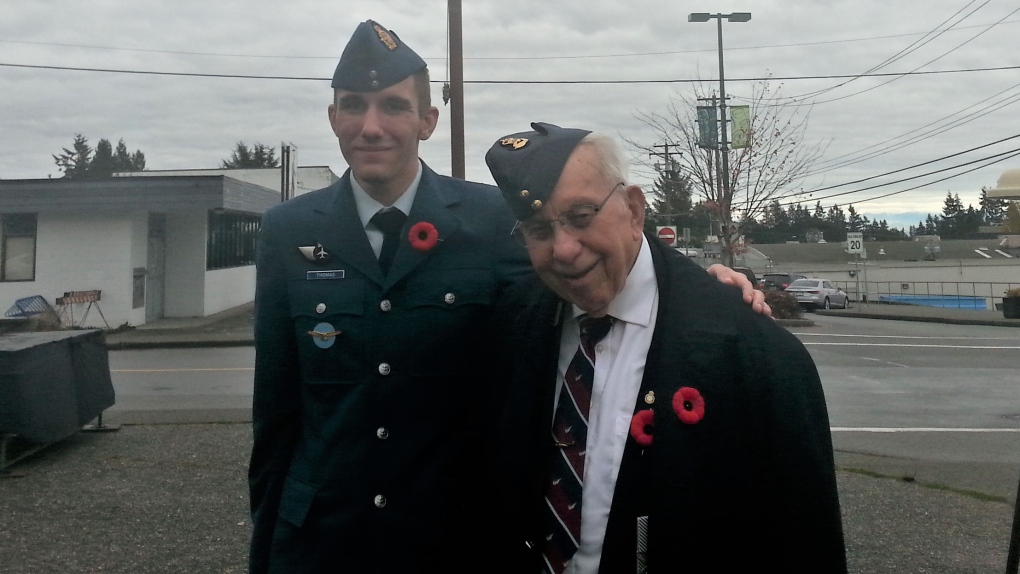 Alexander Thomas, left, with his great-grandfather, John "Doc" Cumbers. Thomas, a 23-year-old corporal in the Royal Canadian Air Force, returns to Coquitlam every year to march in the Remembrance Day parade with 93-year-old Cumbers.

"He's a good kid," said John 'Doc' Cumbers, a decorated veteran who was a rear gunner in the RCAF during World War II. "That's a real honour, to be able to have my grandson with me … He joined when he was very young, and so did I."

Cumbers' great-grandson, Alexander Thomas, is stationed in Trenton, Ont., but for the past four years Thomas has returned to Coquitlam to march alongside Cumbers in the Remembrance Day ceremony.

Joining them will be Thomas' grandmother, Joy Dockrey, who served in the navy from 1968 to 1972 and is active in organizing Indigenous veterans.

"It makes my heart burst with pride and joy," said Dockrey of the three-generation strong presence at the Coquitlam ceremony.

"For me, I'm just the proud grandmother seeing my grandson march, and I'm so proud of his great-grandfather that he's a living legend."

In the week leading up to Remembrance Day, Cumbers often visits schools to speak to children about his experiences in the war. Ultimately, Cumbers' message is anti-war, because of its enormous cost: "I just think that war is such a waste of time," he said. "I don't know of any war that was ever won."

The retired firefighter also volunteers with the RCMP and with Air Cadets. Cumbers said the reason he takes the time to visit schools is simple: "I like young people."

"I want (people) to look and see how smart and wonderful young people are today," Cumbers added. "In the media, you hear about all the bad things they do, but you don't hear about the good things."