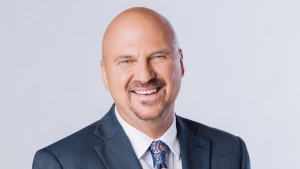 Marke Driesschen is a weather specialist for CTV Morning Live in Vancouver.

A graduate of Seneca College in Toronto from Radio-TV Arts, Driesschen started his broadcasting career in radio with CFYN in Sault Ste. Marie before moving to Saskatoon shortly after. He spent the next eight years as morning host for CFMC-FM, as well as performing on stage with several of the city's theatre and improvisational comedy groups.

In the early 1990’s he moved out west to Vancouver where he was the host for Your Town on CKVU-TV as well as their weather specialist.  He also continued to perform stand-up and improvisational comedy, performing at many of the city’s comedy venues and opening shows of Steven Wright, Louis Anderson and Dennis Miller.

In 2009, Marke went back to the radio air waves and co-hosted a show on Talk 1410 (CFUN-AM) with Nikki Renshaw called The Nik and Marke Show, a daily talk show about the day’s news and hot topics.

When Marke isn’t telling us about the weather, you may also see him up on the big screens and other TV series, as he has appeared in Final Destination 2, Smallville, Mr. Magoo, Elektra and The Dead Zone.

He also continues to help host and emcee events for many charitable organizations, such as the Juvenile Diabetes Research Foundation. Marke is delighted to be working alongside JDRF with their annual Rockin’ for Research and the Ride for Diabetes Research.

Away from the stage and television, Marke likes to spend time with his family. He also enjoys getting out on the North Shore trails with his dog Brodie, biking, going to BC Lions games (he's a long time season ticket holder) and travelling.