VANCOUVER -- Teanna Elliot has always known she was adopted as a newborn. But social workers advised her parents not to tell her right away that she'd been abandoned in a Calgary parking lot in 1987, head poking out of a garbage bag, her umbilical cord still attached.

She learned the truth at age 12.

“At first, I thought it was the coolest thing ever," said Elliot, who now works as a teaching assistant in Kelowna, B.C. "I went to school the next day and I was like, 'Oh my gosh you would never believe what my mom just told me.' It wasn't until I was about 16 that the feelings of abandonment and depression started to come through.”

Wanting to meet her birth parents, Elliot first went public with her story on social media in 2017.

"It blew up," she said. "My three days were crazy. It was interviews after interviews, and someone sent me money to do a ancestry kit."

Elliot sent in her DNA and was contacted by someone saying they had shared grandparents. From there, she found her birth father, who didn’t know she existed. Then, she connected with her birth mother.

“I sent her an email saying, 'Let’s get to know each other, let’s not even talk about anything related to what happened in in 1987,'” said Elliot. “She's very scared. She still thinks the world's going to judge her, and she just thinks a lot of people are going to be angry with her. And I want to be clear, I don’t want that.”

Elliot believes her birth mother purposely left her where she knew her infant would be discovered.

“When you hear baby in a garbage bag, a lot of people assume the entire child was inside this bag," Elliot said. "My head was out, it was taped to my body, my umbilical cord was tied off and I was placed in a busy parking lot that I was definitely going to be found (in)."

“She was not left to be abandoned, she was left to be found,” said Elliot's adoptive father Michael Guzzi, who first learned of the newborn dubbed “Baby Mary” when he saw a November 1987 newspaper article about her. 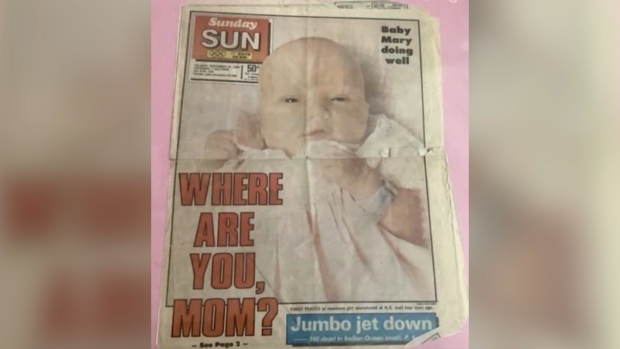 “My wife came downstairs and said, 'I want her,'" Guzzi said. "And I said, 'So do a thousand other people, so good luck with that.'”

Ultimately, though, the Guzzi family was chosen, and it soon moved from Calgary to Kelowna.

Guzzi said he’s glad his daughter now has a relationship with her birth father, and hopes she can meet her birth mother as well.

“There is no animosity from us at all," Guzzi said. "I would love them to meet, talk. Mom has kept this a secret for 32 years. I think for her, just for them to hug would be great.”

Elliot, who is now a mother herself, would also eventually like to meet her birth mother. But she said she understands why the woman, who still lives in Alberta and whose identity she is keeping private, isn’t ready yet.

“At this point, I just have to give her time," Elliot said. "She's been living with this for 32 years now. This has probably taken a huge emotional toll on her, and I don’t think she thought I'd be able to find her."

“Of course I want to learn more, I have lots of pressing questions that I think only she can answer,” she said. “Let’s start basic, let's know each other’s favourite colour, what do you do for work, what are your hobbies. So, we’re taking really baby steps together.”