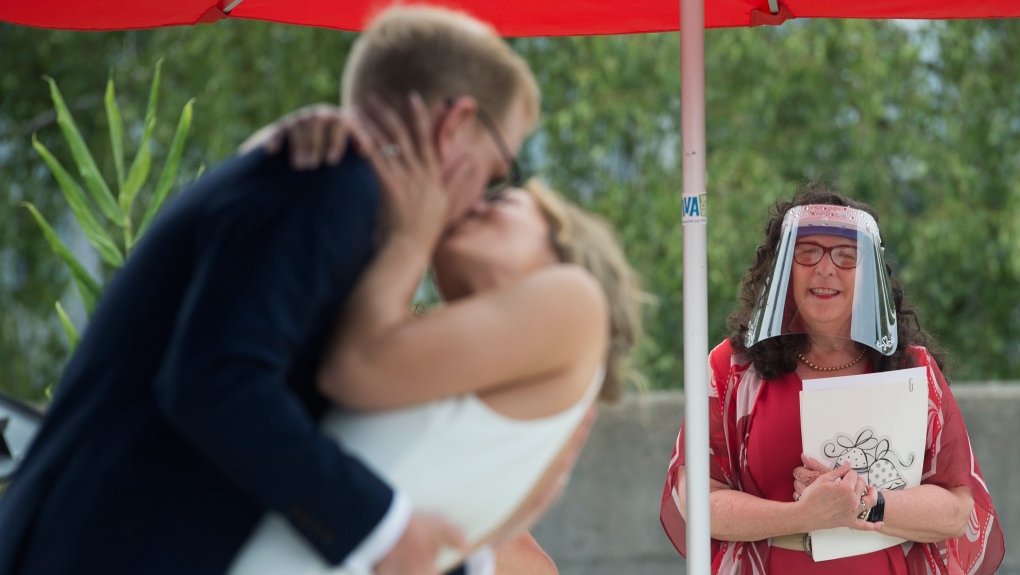 VANCOUVER -- Nikki Alexis and Roni Jones originally imagined their September wedding would include 100 people, including friends and family, and a large celebration.

The COVID-19 pandemic changed that, with gatherings of more than 50 people prohibited across British Columbia.

“It wasn't safe for us,” said Alexis, speaking after their wedding ceremony. “We knew we still really wanted to get married this year.”

The couple joined others from the area to take part in a City of Vancouver-led “micro-wedding” on Friday afternoon.

The events, which are booked through the city, feature a handful of witnesses, a commissioner and a photographer.

“I think this is just one of those little ways we can help people who otherwise had to put their fairly extravagant and long-planned plans off,” said Melissa de Genova, the city councillor who brought forward the motion to allow weddings at city hall.

De Genova said she was inspired by seeing weddings at city halls in other communities.

She intended to have the ceremonies held inside council chambers with a plan to eventually stage them on the roof to allow for a panoramic shot of Vancouver.

The COVID-19 pandemic changed those plans, with staff working to allow weddings in a plaza in front of city hall.

The weddings can range in style. One couple hired a limo. Another wedding featured a friend showing up with a guitar to serenade the happy couple exchanging their vows.

“We picked up a marriage licence at the beginning of May so it was perfect timing,” said Nathalie Pohl, who married her partner Art on Friday.

Nathalie and Art were engaged for three years and both say the small aspect of the micro-wedding appealed to them.

The Pohls met on a dating website, holding their first date at a Coquitlam restaurant.

“We closed the restaurant down,” said Nathalie during her vows.

There are some limits with the city-led ceremony. Only 10 people, including photographers, are allowed to attend and the 30-minute weddings are staggered throughout the day. Interested couples have to bring a marriage licence, hire a wedding commissioner or officiate and bring at least two witnesses.

Another couple - Alexis and Jones - admitted there were some tough discussions about who would be allowed to attend. Those unable to be there in person joined in by Zoom.

“This is certainly smaller, I think we originally planned for 100 people and today we had 10 people,” said Jones, who added that he thought the experience was great. “It's certainly a little different than planned.”

City staff plan to marry 40 couples outside city hall this summer across five days of weddings. July 27 has been designated for two spirit, lesbian, gay, bisexual, transgender and queer couples to celebrate Pride.

City staff said they will evaluate if the weddings were a success at the end of the summer and determine if it's a viable project to continue in the future.