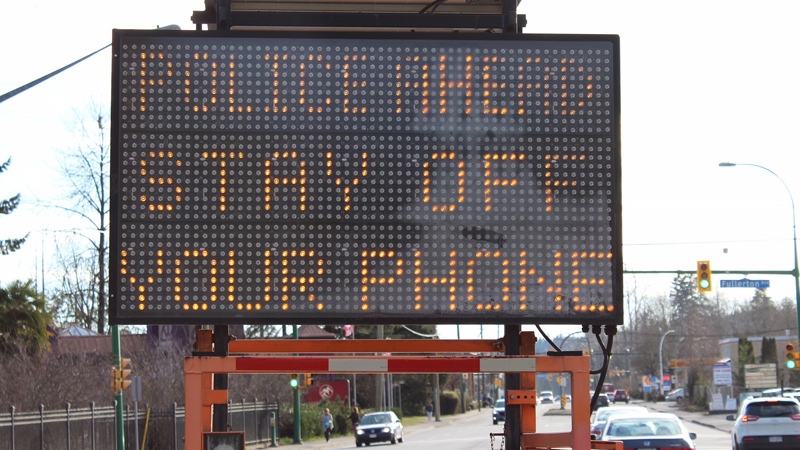 Mounties warned drivers of an upcoming checkpoint with large, lit-up signs, but dozens on the North Shore were still caught using their phones.

Even with large, lit-up signs warning of an upcoming police checkpoint, dozens of drivers on the North Shore were still caught using their phones behind the wheel.

North Vancouver Mounties set up several signs as part of an awareness campaign Tuesday, forewarning drivers that they'd be watching.

The signs, which read, "Police ahead – Stay off your phone," were in full view of those approaching the intersections.

During that time, officers issued tickets to 89 drivers, 74 of which were for distracted driving. The remaining tickets were for other offences under the Motor Vehicles Act.

Using an electronic device while driving has been banned in B.C. for eight years, but is still considered a leading cause of crashes.

"It is evident there is still more education and enforcement needed to make our roads safer," Cpl. Richard De Jong said in a statement following the exercise.

The penalty for a single distracted driving infraction is a $368 fine and four demerit points. On a first infraction, the driver will also have to pay a $175 penalty point premium to ICBC.

Those with two or more infractions in a three-year period will be charged a driver risk premium, billed annually, which will increase with each conviction.