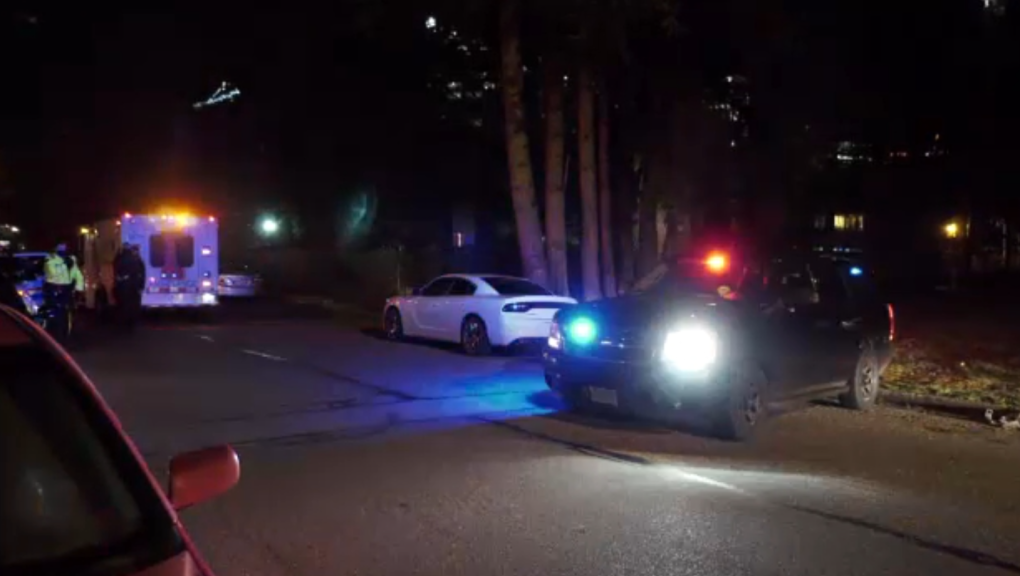 The incident concluded near the intersection of 105 Avenue and 132 Street in Surrey, after taking place across several other cities. (CTV)

VANCOUVER -- Four men were arrested and a police officer was sent to hospital after an hours-long incident that stretched through several Lower Mainland cities Friday night.

The situation began in Surrey, where members of the local RCMP detachment's crime reduction unit were in unmarked cars following a vehicle that had been reported stolen, as well as a vehicle that was "very known to them," according to Surrey RCMP Insp. Dale Carr.

Carr said the officers followed the vehicles "covertly" from the Newton neigbourhood to Cloverdale, where they saw two men exit the stolen vehicle and get into the known vehicle.

The officers stayed with the stolen vehicle and called in backup from uniformed officers in marked cars and an RCMP helicopter, Carr said. He said the uniformed police attempted to pull over the suspect vehicle, but it fled from them.

"The uniformed vehicles then backed off and we allowed the air services to continue to follow and we followed from afar," Carr said. "We went completely into New West over the course of the next three hours, into New West, all through New West, into Delta, through Delta, back into Surrey."

Once back in Surrey, the vehicle dropped off two men near the city centre, and police quickly arrested them, according to Carr.

The vehicle continued to the vicinity of 105 Avenue and 132 Street, where the two men inside "dumped" it and started to run, Carr said.

During the final arrest, one of the officers was injured. Carr said it appeared that he may have separated his shoulder.

The officer was taken to hospital for treatment. The suspect also sustained "a very minor injury" from "coming in contact" with the police dog, Carr said, adding that he was treated by paramedics at the scene.

Carr said the incident is an example of the multi-jurisdictional nature of policing in the Lower Mainland, noting that criminal activity often takes place across multiple cities and requires coordination between multiple police organizations.

The suspects have not yet been charged, but are likely to face charges of flight from police, dangerous driving and possession of stolen property, Carr said.