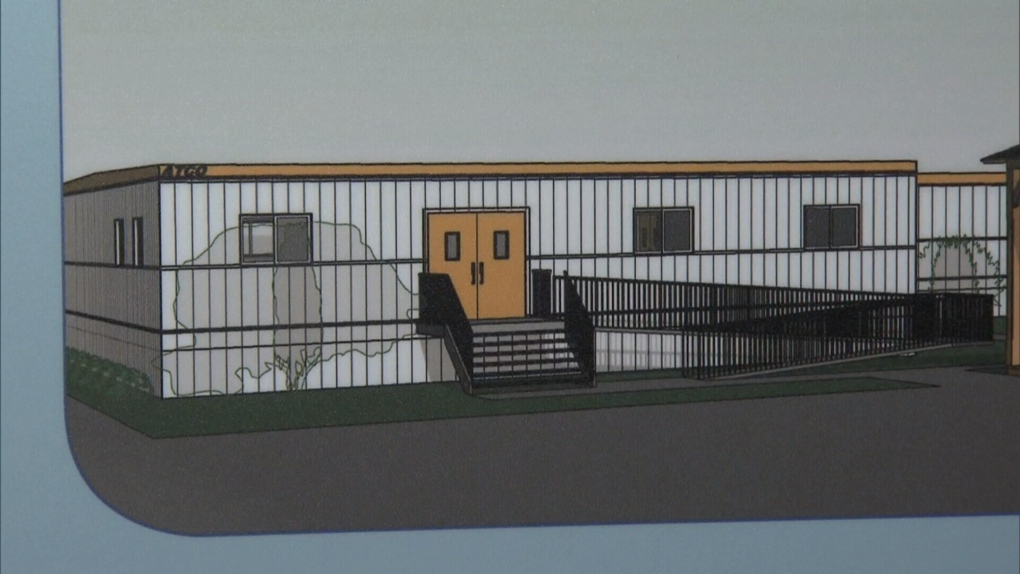 A rendering of planned modular housing for Surrey's homeless residents was displayed at a press conference on Friday, Jan. 12, 2018.

The B.C. government and the City of Surrey have announced plans for three new modular housing projects for Surrey's homeless residents.

The province is providing $13 million in capital funding plus $1 million to fund operating costs of three new sites that will provide housing, meals, counselling and medical services to the city's most vulnerable residents.

"No one should be forced to live on the street without access to safe and supportive housing; a dry place to put your head down at night," Selina Robinson, minister of municipal affairs and housing, said at a press conference Friday.

The 2017 homeless count, a survey that attempts to track the number of homeless people in Metro Vancouver, counted 602 homeless residents in Surrey. The real number, advocates say, is likely higher.

Homeless residents in Surrey can often be seen camping on 135A Street in Whalley, a street known as the "The Strip."

One proposed site for the modular housing units is near there, at 10662 King George Boulevard just north of the Dell Shopping Centre. The second proposed site is also nearby, about a block south at 13550-105 Avenue. The third site is still being confirmed.

There are 160 new units planned and they are scheduled to be in operation by early spring 2018.

"Once built, given the type of accommodation and number of spaces that are being provided, I cannot think of a reason for anyone to pitch a tent on 135A Street," said Surrey mayor Linda Hepner.

The modular units are designed to be an emergency solution to transition people off of living on the street.

Later, the province and the city plan to replace the modular housing with 250 units of permanent, affordable housing once additional sites have been identified.

The modular units will include individual rooms with private bathrooms. The sites will have 24/7 staffing and also connect residents with services they need like addictions services, medical offices and life and employment skills counselling.

"This minimal-barrier accommodation has been so badly needed to help individuals stabilize and get connected to services they need," said Shayne Williams, executive director of the Lookout Housing and Health Society, in a press release.

Lookout is the organization that will be operating the modular housing sites.

One of the sites also will have an intensive case management team to assist those with severe substance use disorders.

There will be a public information session hosted by the city and BC Housing on Tuesday, Jan. 23 to answer any questions about the project.