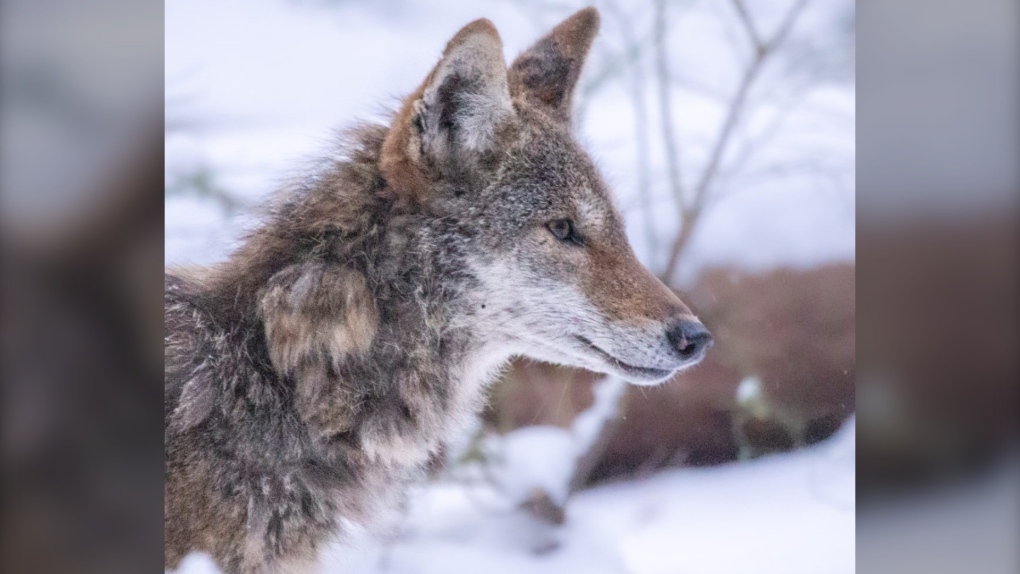 A coyote called Kip is causing a stir on the UBC campus, not because of its good looks or bad behaviour, but with its signature rolling gait as it propels itself along on just three legs. (Liam Brennan)

VANCOUVER -- They’re sleek and furry and call Metro Vancouver home, but coyotes have been in the local news recently for all the wrong reasons. A series of attacks on joggers in Stanley Park sparked an unprecedented warning from the B.C. Conservation Officer Service to avoid running in the park.

That kind of reputation can be hard to shake, but one member of the coyote clan is garnering attention without going anywhere near a human being because he stands out as a bit of an underdog.

A coyote called Kip is causing a stir on the UBC campus, not because of its good looks or bad behaviour, but with its signature rolling gait as it propels itself along on just three legs.

Kip's back right leg, while intact, dangles without touching the ground, likely the result of an injury, possibly from an encounter with a vehicle.

Kip and a sibling were born to a mating pair last year, according to UBC's Dr. Kristin Walker, a researcher and assistant professor in the faculty of land and food systems. The coyote has been appearing on researchers' field cameras and the occasional YouTube video, likely more than usual because there are far fewer humans for it to navigate on campus due to the COVID-19 pandemic. The broad open spaces between buildings mean a wider hunting ground in the animal’s near-constant search for prey.

“This is just giving us an opportunity to be able to see some of the animals a little bit more,” said Walker. “Kip in particular has been highlighted I think because of the injury to the back leg, and so people are taking note of this individual.”

So much so that UBC issued a news release Wednesday outlining the steps being taken to monitor and assess the animal. Campus researchers want to assuage concern and ask for the public’s help so Kip doesn’t develop bad habits like the Stanley Park hooligans.

“We’ve been getting lots of calls from the public about Kip due to the injury,” Walker said. “That is something we’ve been working on closely with different organizations.”

Walker and her students, along with wildlife veterinarians, wildlife rescue, the Conservation Officers Service, and the Stanley Park Ecology Society teamed up to assess Kip's welfare and chances of survival.

In the release, Walker said the groups have decided to "let the animal be" and monitor it using trail camera footage and incidental sightings.

"The coyote is highly mobile, has been seen actively hunting (squirrels and voles) and capturing prey on dozens of occasions, and is in overall good body condition. Kip is also occasionally seen with other members from its pack," she said.

The most important message though is to encourage the public on campus to leave Kip alone.

“We need to ensure that the wildlife stays wild and that we refrain from any type of feeding of the animals on campus.”

Feeding a wild animal like Kip would likely have a detrimental impact by encouraging it to see humans as a meal ticket, a theory put forward to explain the aggressive behaviour of the animals in Stanley Park.

“When people start feeding the animals they become dependent on that food,” Walker said. “And that’s when you see these coyotes become aggressive, and typically it is food aggression.”

In fact, according to the release from the university, they want people to “haze” Kip, to send a strong message that humans are a no-go by waving one’s arms, appearing big and noisy, and standing one’s ground. A stick or rock can be thrown in his direction, without hitting him, of course. The idea is to make Kip want to avoid people by campus-goers employing those tactics “persistently, consistently, and humanely,” UBC said.

So far, Kip appears to be getting the message. His injury does not require intervention at this time, so his contact with the few remaining biped campus-users is nil, and Walker wants to keep it that way.

For further information on helping keep both humans and wild animals like Kip safe, the Stanley Park Ecology Society offers information on its website.