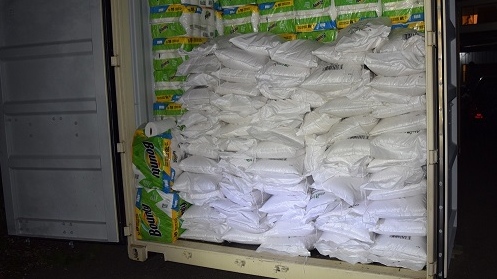 Police say they received a report on May 10 that a large quantity of rice worth about $20,000 had been stolen from a business in South Burnaby.

Investigators got a tip in mid-June the rice was being sold online and in public, which led them to a warehouse in Langley.

Officers executed a search warrant at the warehouse on June 26 and seized numerous stolen goods, including 400 packages of paper towels, 26 pallets of sandals, 3,200 pounds of rice, and large quantities of diapers and toilet paper. Police also seized more than $1,500 in cash and a crate of ammunition.

"The warehouse contained a stockpile of stolen goods on a commercial scale and was located after diligent investigative efforts and coordination between a number of units at Burnaby RCMP," Insp. Matt Toews said in a statement Tuesday.

Charges will be forward to Crown when the investigation is finished, police say.