17 husky puppies rescued in B.C. Interior now up for adoption 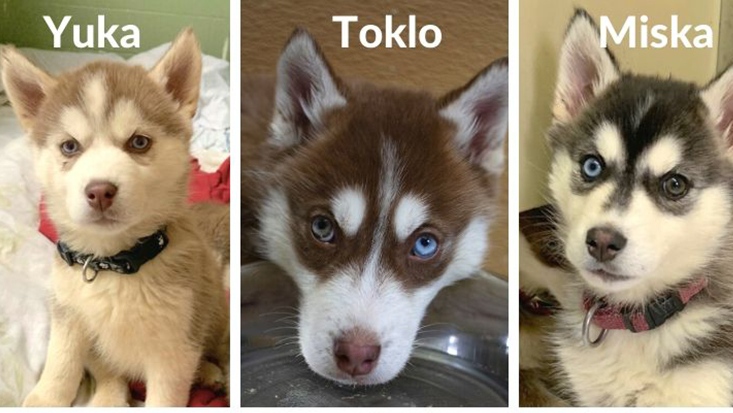 The rescued Siberian husky puppies can be seen in this BC SPCA handout photo.

VANCOUVER -- Adoption applications are already pouring in for the 17 Siberian husky puppies rescued from deplorable conditions in the province's Interior.

Now given names, the BC SPCA says they have been receiving a lot of interest in the adorable pups, with most of them ready for adoption at its Vernon and South Okanagan shelters.

The smallest puppy, called "Uki" has some medical concerns and will require more time in the shelter's care. But staff members are hopeful that he will live up to his name, which is an Inuit word meaning "survivor."

Their names were chosen from suggestions made by the public, which consisted of two themes: Northern and Norse gods. After voting in a poll, Northern was the clear winner.

The eight to 10-week-old puppies were taken in on Christmas Eve, along with two adult dogs—after RCMP and animal control workers discovered them in poor conditions on an undisclosed property.

"They came across 17 puppies who were living outside in the cold in the snow without adequate food and water," said Marcie Moriarty, chief prevention and enforcement officer for the BC SPCA.

"They definitely were full of worms, one or two were quite lethargic."

Potential adopters can fill out an application online but will be required to meet the dog in person, to ensure they're a good fit.