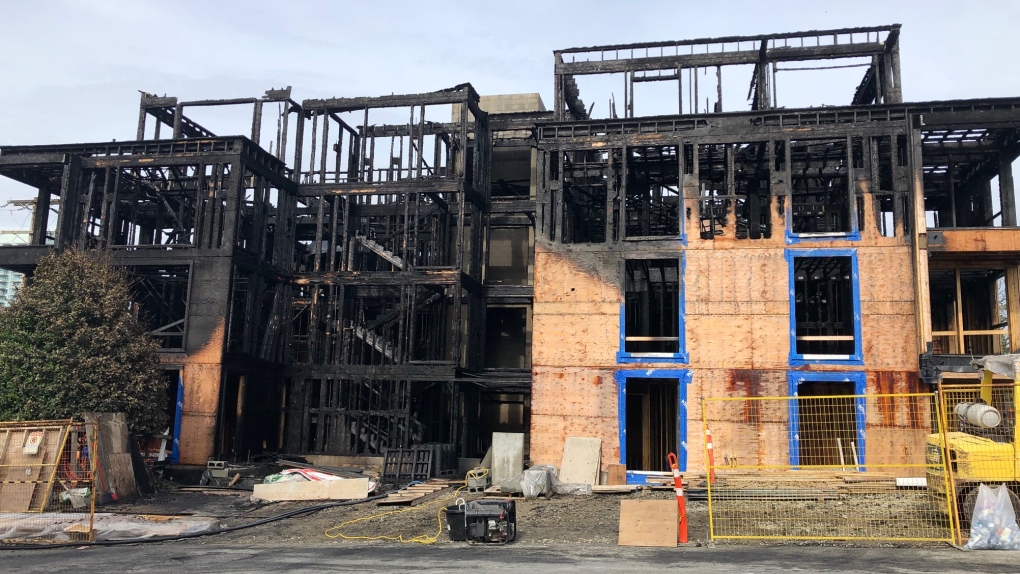 The aftermath of a massive three-alarm fire in South Vancouver that started at a four-storey construction site is seen on June 19, 2020.

VANCOUVER -- An investigation is underway into the cause of a massive three-alarm fire in South Vancouver that was sparked early Thursday evening.

Firefighters at the scene said the fire started at a four-storey construction site at the corner of West 62nd Avenue and Columbia Street, and eventually damaged four townhouse units next door.

"It was just fully engulfed in flames," said neighbour Dave Jeffery, adding he spotted flames from as far away as Main Street before he arrived. "That heat was so intense. My face was, like, burning red.”

“It was very intense heat,” describes Acting Batt. Chief Andy Sojka. "It melted some fire hose in the back alley."

"Crews have to take a defensive approach first," Sojka said. "We have no idea what’s in there....with a building under construction, there might be propane tanks in there."

A dozen people living in four townhouse units next door have been displaced because the fire blew out neighbouring windows and burned through the roof.

The development at 308 West 62nd Avenue was intended to have 26 units of market rental housing with underground parking.

A representative from the developer who was speaking with fire investigators at the scene declined an on-camera interview with CTV Vancouver, but said construction workers had gone for the day when the fire started, and referred further inquiries to the investigator.

Approximately 45 firefighters battled the flames. No injuries were reported.