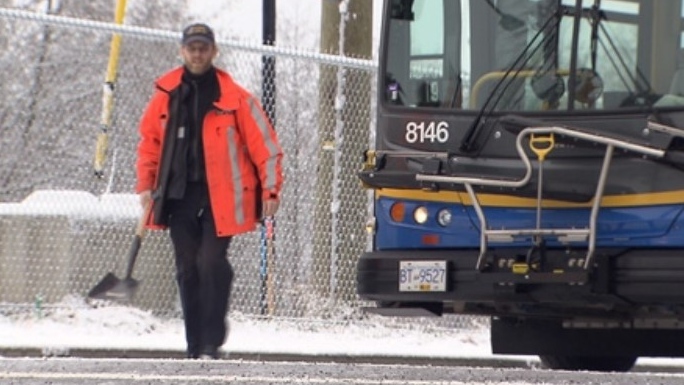 Vancouver was under a snowfall warning Friday, Jan. 10. (File photo)

TSAWWASSEN -- Service has resumed along all major BC Ferries routes, after a dozen sailings were cancelled Saturday.

“We did go ahead with the 7 a.m. and 9 a.m. sailings out of Swartz Bay, however the winds did pick up,” said Chelsea Carlson, a spokesperson for BC Ferries.

Sailings along some of the less popular routes, including to the Southern Golf Islands, Fulford Harbour (Saltspring Island), Snug Cove (Bowen Island) and Langdale continued as scheduled.

“We don’t take the cancelled sailings lightly and we appreciate everyone’s patience, but it is all for safety reasons” said Carlson.

It’s the second day in a row that travellers have been affected, and BC Ferries says there is "a high probability" of more cancellations on Sunday, as more wind and snowfall is expected across the South Coast.

More than 50 sailings on nine different routes were cancelled Friday after high winds created treacherous conditions on the water.

The first sailings out Tsawwassen didn’t depart until 3 p.m. Friday.

“We have different parameters for sailing cancellations," Carlson said. "So we take into consideration a number of factors, including the wind speed, sea state and wave height."

The potential for delays didn’t deter some travellers.

“We’re going. Well, we’re going as long as there is a sailing today. So obviously the weather is going to work for us or work against us,” said Adrianne Bull, who was determined to make her hotel reservation in Victoria.

Linda Burdick and her husband travelled from New Hampshire this weekend to stay at their vacation home in Victoria.

“We’re disappointed because we were really hoping to get to our home away from home and relax, but we’ve driven 3,000 miles to get here, so what’s another couple hours waiting?” Burdick said.

She was in good spirits, pointing out that weather delays are a part of winter travelling.

“You just have to regroup and find something else," she said with a laugh. "If plan A doesn’t work, you go to plan B. And if you can’t think of plan B, you shouldn’t be travelling.”

BC Ferries is reminding travellers to plan ahead.

“There are some lineups out there, but the best thing for customers to do is to check current conditions on our website to see how full the ferries are,” Carlson told CTV News.

Sailings along all the major routes resumed at 3 p.m. Saturday, but they were no match for the backlog of waiting passengers at the Tsawwassen terminal.

“I’m disappointed that I was the last one not to get on. But look at the bright side, I’ll be the first one off next,” said Andrew Stewart as he waited for the next sailing.

“It’s heartbreaking. It’s another two hours to wait,” said Rory James, a passenger who had already endured a five hour long, snow-laden journey from the Okanagan.

Strong northwesterly winds were expected to hit Richmond, Delta, and Tsawwassen the hardest with gusts of up to 90 km/h.

“Loose objects may be tossed by the wind and cause injury or damage. Be prepared to adjust your driving with changing road conditions due to high winds,” warned Environment Canada in a statement.

Forecasters predicted the winds would die down by Saturday evening, but an additional wind warning was issued for Sunday.

A snowfall warning is also in effect for Metro Vancouver. Environment Canada says another low pressure system will bring snow starting Saturday evening, with five to 15 centimetres of snow possible by Sunday afternoon.

Communities that are at higher elevation, like West Vancouver, North Vancouver and Coquitlam, will see the greatest snowfall of up to 15 centimetres by Sunday afternoon. Vancouver, Burnaby and New Westminster will see wet snow mixed with rain.

Southerly winds may raise temperatures enough to bring rain rather than snow to Surrey and Langley, while Richmond, Delta, Tsawwassen and Ladner will likely see rain.