Woman who lost Penticton, B.C., home in tax sale getting $140K in compensation 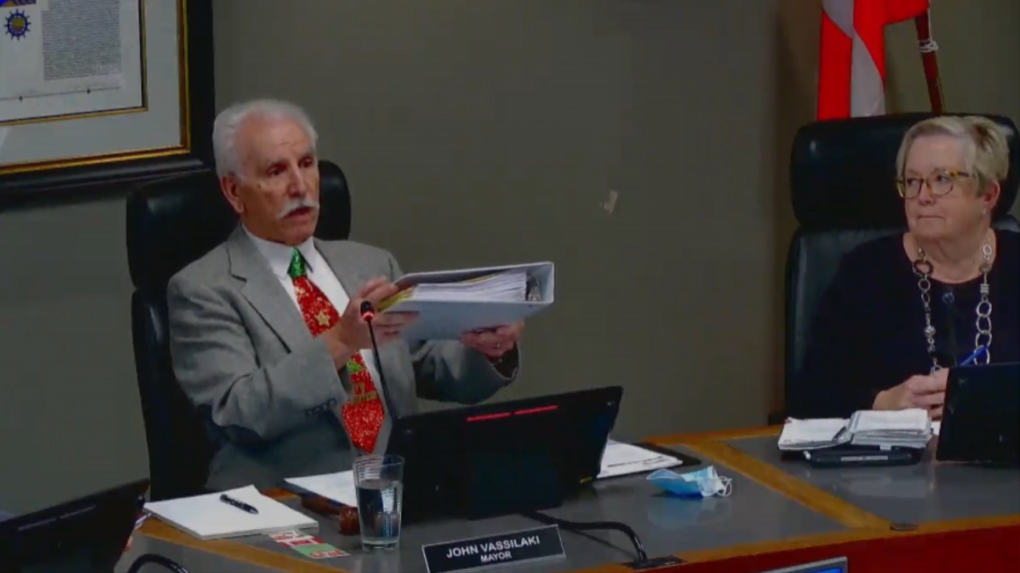 Penticton Mayor John Vassilaki holds up a binder of documents that the B.C. city provided during an ombudsperson's investigation into a 2018 tax sale.

The City of Penticton has agreed to pay $140,000 in compensation to a vulnerable resident whose home was seized and sold over about $10,000 in overdue property taxes.

Councillors voted 5-1 in favour of compensating the 60-year-old woman at a Tuesday afternoon meeting, during which Mayor John Vassilaki also offered an apology on behalf of the city.

"I'd like to state how sorry this city council is for what happened," Vassilaki said. "(The home) was her whole life savings. She needed those funds for her old age, so she can live comfortably for the rest of her life."

Vassilaki also stressed that the tax sale took place under a previous council, and said Penticton councillors have been "unfairly targeted" as a result of the national attention drawn by a damning ombudsperson's report on the incident.

Under B.C. law, bidding can begin at what's known as the upset price, which is the sum of the taxes owing, interest, penalties and applicable fees.

Wilson's sister, who had power of attorney in her affairs, reported the sale to B.C.'s ombudsperson, who conducted a years-long investigation resulting in several recommendations, most aimed at improving the provincial government's guidelines and legislation regarding tax sales.

One recommendation was also that Penticton pay Wilson half of the equity she lost in the sale, something the city originally refused to do.

"I am very pleased that city council has accepted our recommendation," ombudsperson Jay Chalke said in a news release Tuesday evening. "This outcome demonstrates that it's never too late to do the right thing."

The lone vote against compensating Wilson was from Coun. Campbell Watt, who called the circumstances "tragic" but argued Penticton taxpayers shouldn't be on the hook for the homeowner's lost equity.

"I don't think council was wrong, I think the process is wrong," Watts said at the meeting. "At the end of the day, it's coming out of taxpayers' pockets, and that's where I don't feel OK with it."

The mayor and councillors repeatedly noted that the city acted legally seizing Wilons's home, and pinned most of the blame for what happened on deficiencies in B.C.'s Local Government Act, which, among other things, provides the framework for tax sales.

Vassilaki also criticized the ombudsperson's report for a number of perceived shortcomings, holding up a binder containing "hundreds of pages of information that was not included in the report."

The mayor said the city was unable to provide a full rebuttal because the ombudsperson "has legislative powers that prevent the city from releasing its side of the story," but still directed staff to highlight a handful of points. They included a claim that Wilson had told staff she understood her predicament and didn't want to speak about it further when contacted by phone.

"There is another side to the story," Vassilaki said. "I don't believe we deserve the harsh statements that were made upon us."

The ombudsperson's report cited unspecified health concerns that made it hard for Wilson to pay her taxes, and criticized the city for failing to recognize her as a vulnerable person or trying to investigate what led to her overdue payments before seizing her home.

Chalke also recommended that B.C. consider updating its legislation to begin bidding at the home's assessed value, something Penticton staff said would actually have a detrimental effect on most homeowners, who have one year to "redeem" their property by paying their outstanding taxes along with interest on the sale price.

The vast majority of Penticton's tax sales end with the original owner redeeming their property. Wilson's home was only the third of 152 tax sales to be completed in the city over the last 32 years, according to the ombudsperson's report.

Prince Charles was invested as an extraordinary commander in the Order of Military Merit and laid a wreath at the National War Memorial as he began the second day of his Platinum Jubilee tour of Canada.

Alberta Premier Jason Kenney is to learn today if he still has enough support from his party to stay on as leader.

The cost of nearly everything at the grocery store continued to climb higher to push the annual inflation rate up in April.

What's the average price of a home where you live?

Casey White and Vicky White paid a man to help them book an Indiana hotel room during their time on the run after the inmate and corrections officer slipped away from an Alabama jail, setting off an 11-day manhunt.