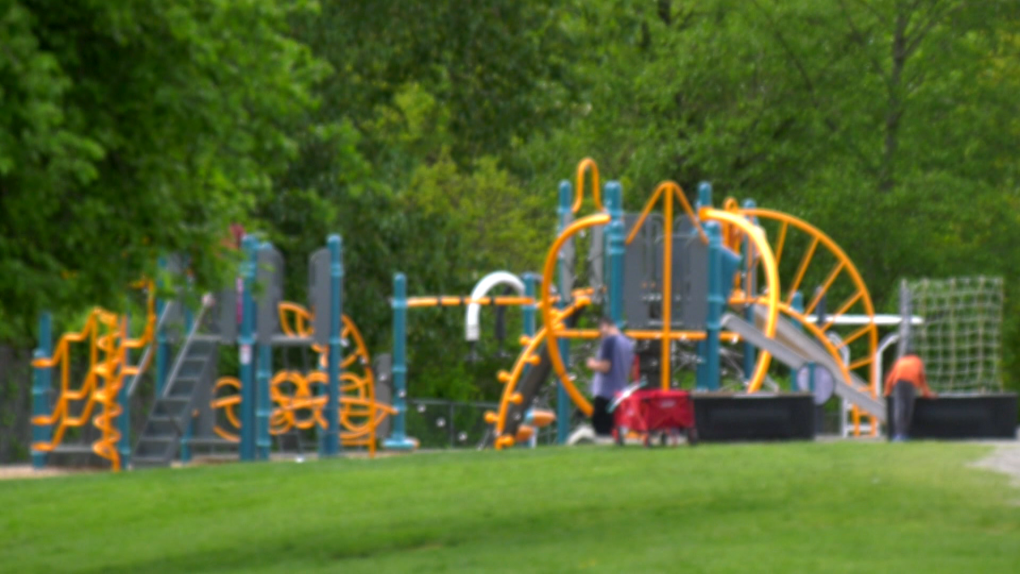 A still image from video, blurred to protect members of the public in the playground, shows part of the property around Coyote Creek Elementary School on Friday, April 30, 2021.

VANCOUVER -- Police are looking for more information following a report of what they call an "indecent act" at a Surrey school.

It was reported that a woman was approached by an unknown man while in the playground at Coyote Creek Elementary School Thursday.

The victim has not spoken to police, the RCMP said in a news release the next day. The account was reported by someone officers are calling a "third party."

Mounties said they're trying to get in touch with the woman who was at the school between 4 and 5 p.m. Thursday.

They're also looking for witnesses and anyone with more information on the incident.

The suspect has been described by the Surrey RCMP as a South Asian man in his 20s with "a dark complexion."

It's the second suspicious incident reported by the school this month.

Mounties were called on April 18 after a woman walking in the wooded area near the school saw a man she believed to be hiding in the bushes.

She told police that the man emerged and walked towards her as she started to get closer.

The woman said she ran from the area, then called police.

So far, officers do not know whether the incidents on April 18 and 29 are connected. They're hoping anyone with video or information will come forward.

Tips can be made directly to the RCMP detachment or anonymously through Crime Stoppers.

Surrey RCMP School Resource Officers are working with staff at Coyote Creek Elementary to let parents know about what was reported.

Mounties encouraged the public to trust their instincts, and to call 911 if they think they're being followed.