Wildfire threatening West Kelowna back down to 250 hectares

A wildfire that prompted a state of emergency in West Kelowna, B.C. has shrunk from 400 hectares to 250, but remains largely uncontained.

Wildfire Management B.C. said the Smith Creek fire was just 20 per cent contained at the base on Friday afternoon. The B.C. Forestry Service believes it is human-caused, and an investigation has been launched to find out how it started.

Fire Information Officer Tracy Wynnk said the strategy is to constantly assess how the fire is moving.

“The commander was up in the air this morning taking a look at the fire and getting a better perspective of the type of terrain it’s laying in,” she told CTV News.

An evacuation order in the area has been expanded three times, and now covers 1,100 homes and more than 2,500 residents. Another 150 homes are on evacuation alert.

“Everyone is very anxious as you might expect,” Findlater said. “Things are tinder dry.”

The fire is being fought by 75 firefighters from West Kelowna, Lake Country, the City of Kelowna and Peachland, assisted by two helicopters and seven air tankers.

Westside residents are being told to prepare for power outages, as flames have come within 100 metres of main power lines that serve the city, as well as Peachland and Westbank.

Premier Christy Clark, who represents Westside-Kelowna, spent the day visiting constituents who have been forced out of their homes.

She thanked first responders for keeping people and their property safe.

"Our community is strong and will come together to ensure our friends and neighbours have the support they need in this difficult time," she said in a statement.

Speaking to reporters Friday afternoon, Clark reiterated that sentiment, saying she had seen the resiliency of the community firsthand inside evacuee shelters and at the regional coordination centre.

“People are incredibly well organized,” she said. “We are really working hard to do everything to protect the people, the property, and to make sure people have the support they need.”

“The thing people should know is we are not going to stop spending money because it’s expensive,” she said. “We are going to do everything we can to protect people and property around the province.”

That commitment extends to future wildfire seasons as well, she said.

“I don’t anticipate -- given the realities of climate change and the drying climate here in British Columbia -- that we’re going to see a smaller fire threat for the future,” Clark said. “We need to always think about what we can do to be more prepared next time.”

Residents on evacuation alert watched helplessly from their patios as the wildfire consumed the hillside.

“It is a little scary when it happens this close to your home. That wind so long as it blows that way it’s okay but if it comes this way there’s a lot of residences around that would be, we’d be in a lot of trouble,” said Shannon Lake resident Scott Newall.

Other homeowners were ordered to leave their threatened homes with only minutes’ notice.

“You take all of your electronics, passports, family heirlooms, photo albums. I’ve kept all of those things in a box.”

Marilyn Kaby, who is taking refuge on a cot at a retirement home, said police came to her home and told her she had 15 minutes to leave her home.

“That was quite a shock,” she said. “We ended up sleeping in the van -- me, my hubby and my little kitty.”

Ben Vandale said he tried to go back to his home but police had blocked off his road.

“No toothbrush, no clothes, not passport, no nothing,” he said.

Emergency officials say residents should be prepared to be out of their homes for at least 72 hours, and ensure they have enough food, water, cash, medication and other essential items.

Findlater warns the situation could turn into a long-term problem as resources are stretched in order to fight other fires in the central Okanagan.

“It is only mid-July. Usually we’re still okay this time of year, it doesn’t always come this early. Yeah, we’ve got six weeks left where we could still get into a lot of trouble,” he said.

Dozens of fires across B.C.

There are more than 160 fires burning across B.C., according to B.C.’s Wildfire Management Branch. Close to a dozen of those fires threaten residential structures.

In B.C.’s Fraser Canyon, more than 120 people were forced from their homes because of a wildfire just north of Lytton.

Evacuation orders are also in place just south of Merritt because of the Maka-Murray fire, as well as the massive Red Creek Fire southeast of Tumbler Ridge.

A small fire burning near Harrison Hot Springs that started two days ago is now 40 per cent contained.

People living in the affected regions are advised to avoid strenuous outdoor activities and those suffering chronic conditions are told to stay inside. 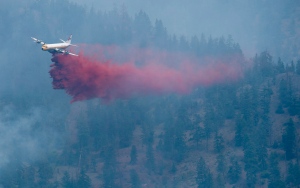