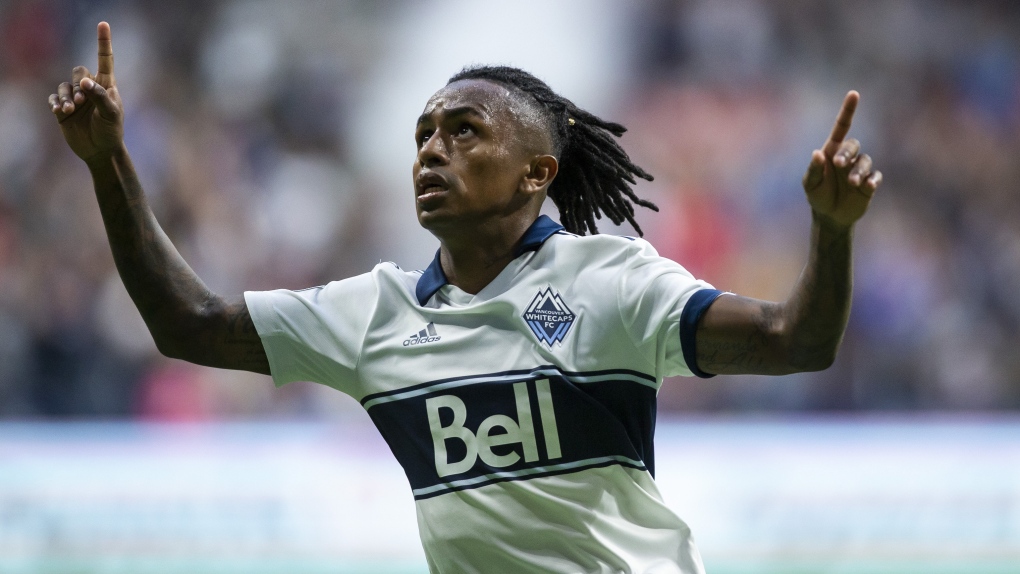 Vancouver Whitecaps' Yordy Reyna celebrates his goal against the Colorado Rapids during the second half of an MLS soccer game in Vancouver on June 22, 2019. Vancouver Whitecaps forward Yordy Reyna has started a 14-day quarantine after breaking physical distancing protocols. The Whitecaps made the announcement on Wednesday, adding that the club has made Major League Soccer aware of the incident and will remain in contact with the league office. THE CANADIAN PRESS/Ben Nelms

Reyna was captured on video Tuesday taking part in a pickup soccer game in a Vancouver park.

The MLS club subsequently said Tunisia international centre back Jasser Khmiri will also undergo a 14-day self-quarantine for contravening physical distancing guidelines. It did not detail his circumstances.

The Whitecaps said Reyna, a 26-year-old Peruvian international, was doing a personal workout when he came across the game. He knew two of the participants and took part in the game for about five minutes after he was invited to join in.

The game was being filmed by Global-TV as part of a report on local residents not following physical distancing guidelines during the COVID-19 pandemic. Someone at the club saw the report, which did not mention Reyna but showed him briefly, and forwarded it to Axel Schuster, the club's sporting director, on Tuesday evening.

“He made a mistake, no question. He was very open about the whole issue,” Schuster told reporters on a media conference call Wednesday. “He apologized immediately. He knew that he had done something wrong.”

Still Schuster called Reyna's action unacceptable, especially when others are not following the rules when it comes to physical distancing as the weather improves and the public grows weary of restrictions.

“It's even more important that we step up and say 'Hey, look how are we are doing these things,”' he added. “It was bad for a lot of reasons what he did. But at the end he's a human being.”

Schuster said the club consulted the league before announcing the self-quarantine and sanction. And he reminded his players “to respect the rules and to be very careful.”

MLS suspended the season because of the COVID-19 pandemic on March 12, closing all team facilities. A league-wide moratorium on team training remains in effect May 15 and it's unclear when the season might resume.

As of Wednesday, the league opened the door to individual player workouts outdoors at team training fields but only under strict guidelines. Like the other Canadian clubs, the Whitecaps are in the process of consulting with local authorities and the league on their protocol for the individual workouts.

He has played 70 regular season games for Vancouver (including 55 starts) with 19 goals and 16 assists. The Peruvian had seven goals in 25 games last season.

The five-foot-seven 145-pounder arrived in Vancouver with the nickname Magic.

This report by The Canadian Press was first published May 6, 2020.