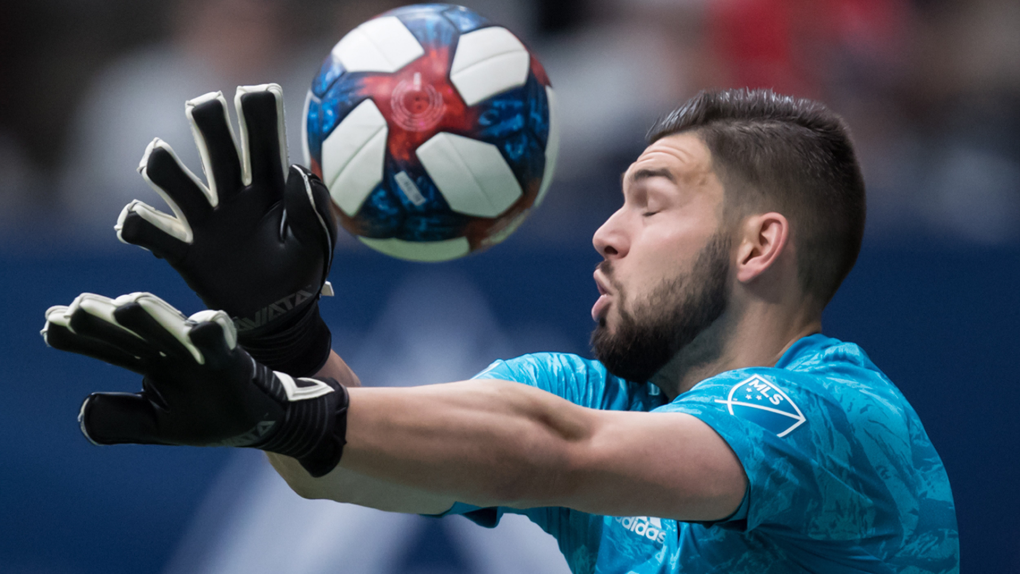 Vancouver Whitecaps goalkeeper Maxime Crepeau reaches for the ball as it goes wide of the goal during the first half of an MLS soccer game against the Philadelphia Union in Vancouver on April 27, 2019. (Darryl Dyck / THE CANADIAN PRESS)
Vancouver -

The Vancouver Whitecaps have dealt Canadian goalkeeper Maxime Crepeau to Los Angeles FC for US$1 million in general allocation money.

Crepeau was not in Vancouver as the club began pre-season training this week. The Whitecaps said he was away for “personal reasons.”

The 27-year-old from Greenfield Park, Que., has been among the 'Caps best players since coming to Vancouver from the then-Montreal Impact in December 2018 and was awarded the team's most valuable player award last season.

He played 26 games for the Whitecaps in 2021, stopping 75.8 per cent of the shots he faced and earning six clean sheets as the club clinched its first playoff spot in four years.

Crepeau was held to four appearances the previous season after fracturing his left thumb during the MLS is Back tournament. A four-hour-long surgery was required to remove the shattered pieces and insert wires to hold the bones together, but the 'keeper stayed with the team as they finished the campaign based out of Portland, Ore., due to pandemic border restrictions.

The move to California could see Crepeau reunited with former Whitecaps head coach Marc Dos Santos, who is rumoured to be taking a position with LAFC. The pair have known each other since Crepeau was 12 years old and part of the Montreal Impact academy.

Dos Santos was dismissed as Vancouver's coach in August midway through his third season with the team.

This report by The Canadian Press was first published Jan. 19, 2022.

In Montreal, a pioneering clinic in the emerging field of psychedelic-assisted psychotherapy is about to become the first health-care facility in Quebec to legally treat depression with psilocybin.

The moon glowed red on Sunday night and the early hours of Monday, after a total lunar eclipse that saw the sun, Earth and moon form a straight line in the night sky.

The European Union's efforts to impose a new round of sanctions against Russia over the war in Ukraine appeared to be bogged down on Monday, as a small group of countries opposed a ban on imports of Russian oil.

Most of Shanghai has stopped the spread of the coronavirus in the community and fewer than 1 million people remain under strict lockdown, authorities said Monday, as the city moves toward reopening and economic data showed the gloomy impact of China's 'zero-COVID' policy.

A man opened fire during a lunch reception at a Southern California church, killing one person and wounding five senior citizens before a pastor hit the gunman on the head with a chair and parishioners hog-tied him with electrical cords.

About 11 per cent of admitted COVID patients return to hospital or die within 30 days: study

At roughly nine per cent, researchers say the readmission rate is similar to that seen for other ailments, but socio-economic factors and sex seem to play a bigger role in predicting which patients are most likely to suffer a downturn when sent home.