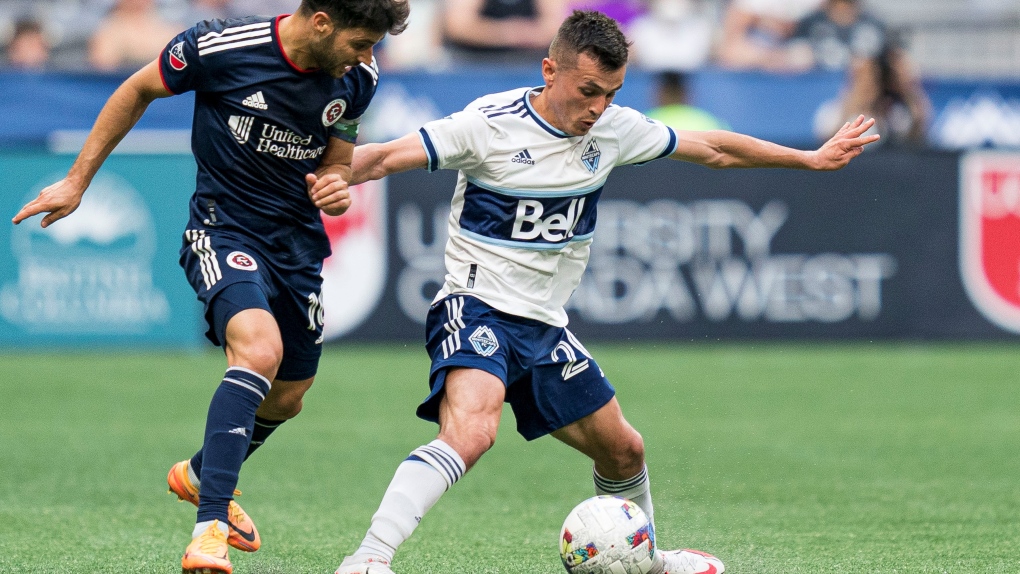 A win would have been better but for goalkeeper Cody Cropper helping the Vancouver Whitecaps battle to a 0-0 Major League Soccer draw with the New England Revolution Sunday afternoon was a personal victory.

Cropper spent four seasons with New England before leaving the team in 2019.

“Going into this week was emotionally a very big one,” said Cropper, who has a 7-1-2 record in all competitions this year for Vancouver. “I had some tough times with the Revs for various reasons.

“I went into this week with my head locked in. I wanted a clean sheet. I wanted three points, but I'll take a clean sheet. They are one of the best offences in the league. They create a lot of opportunities. I think together as a team we did very well in shutting them down.”

The Whitecaps had their chances to score but couldn't beat New England goaltender Djordje Petrovic in the game, played before 15,084 fans at BC Place Stadium.

In the game's dying minutes the Whitecaps buzzed like angry bees around the Revolution net. Striker Lucas Cavallini slammed his hand into the net after missing on a chance from the side of the goal.

Early in the second half midfielder Leonard Owusu tested Petrovic with a right-footed shot from the top of the box. Later both striker Cristian Dajome and midfielder Marcus Godinho forced Petrovic to make saves.

Vancouver coach Vanni Sartini was pleased with the pressure his team put on the Revolution.

“I think we were the best team on the field,” he said. “We created chances. We were in control. Unfortunately, we didn't score and if you don't score you don't win.”

The game also showed his club's growth. It was the kind of match the Whitecaps might have lost earlier in the year on a late goal.

“I'm proud and I'm happy how the team performed,” Sartini said. “A game like this, when you don't score it's easy to lose.”

A win would have moved the Whitecaps (6-8-3) into a playoff spot in the Western Conference. Instead Vancouver and Houston are tied with 21 points, two points back of Seattle for the final playoff berth.

It sets up a big match on July 2 when Vancouver hosts Los Angeles FC, the team with the best record in MLS.

The draw extended New England's MLS unbeaten streak to nine games (4-0-5). The Revolution (6-5-6) are sixth in the Eastern Conference with 24 points.

“We had some decent opportunities where we just didn't hit the target,” he said. “You're not going to score goals if you don't hit the target. It's a point on the road. It's not the worst.”

Vancouver signed Cropper as a backup but he took over the starting role when Thomas Hasal suffered a fractured finger.

“I'm controlling what I can control,” Cropper said about his play. “I can only do what I can do. I don't try and be anything that I'm not. I think collectively right now we're all on the same page. We're very connected right now. We're executing on all fronts.”

This report by The Canadian Press was first published June 26, 2022

Fire at Cairo church kills 41, including at least 10 children: officials

A fire ripped through a packed Coptic Orthodox church during morning services in Egypt's capital on Sunday, quickly filling it with thick black smoke and killing 41 worshippers, including at least 10 children. Fourteen people were injured.

'Fanaticism is a danger to free expression everywhere': Ignatieff on Rushdie attack

After Indian-born British novelist Salman Rushdie was attacked during a writing conference in western New York on Friday, current and former Canadian politicians are weighing in on what such attacks mean for freedom of expression and thought.

Two people from Ottawa were killed when their small plane crashed in Port Hope, Ont. this weekend.