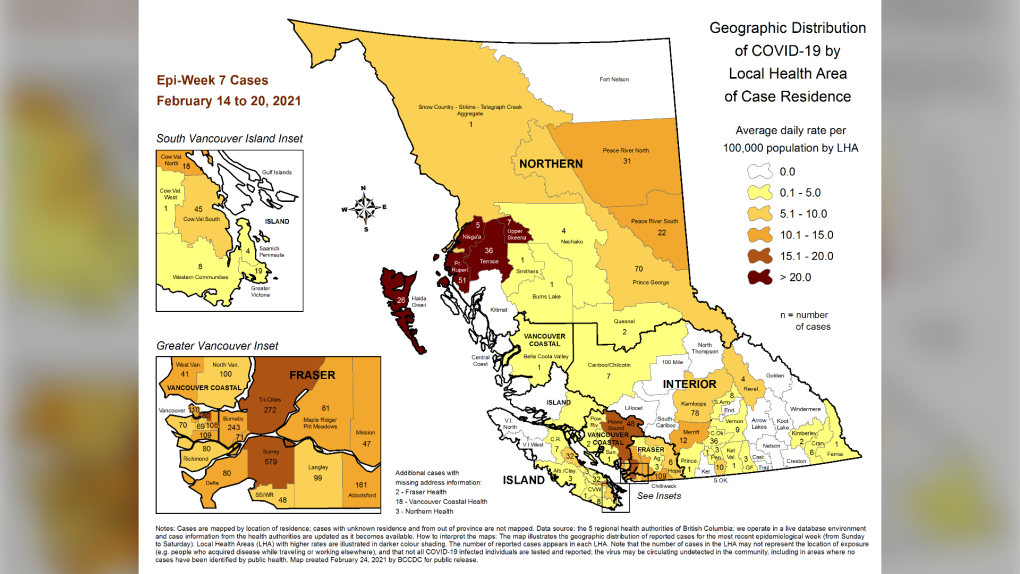 The B.C. Centre for Disease Control has released its map of COVID-19 cases recorded in the province from Feb. 14 to 20. (BCCDC)

That said, the data shown on the B.C. Centre for Disease Control's weekly maps by local health area is always a week behind the daily updates provided by provincial health officer Dr. Bonnie Henry and Health Minister Adrian Dix.

At the province-wide level, B.C.'s active caseload has been trending upwards this week, after several weeks of decline, the last of which is captured in the BCCDC's latest map.

The map shows cases recorded from Feb. 14 to 20, and it includes a dark red splotch on the North Coast, indicating regions that recorded more than 20 cases per 100,000 residents per day during the period.

Five local health areas in the Northern Health region were the only ones in the province to record this highest level of per-capita cases during the week shown on the map. They are: Prince Rupert, which recorded 51 total cases, Terrace (36), Haida Gwaii (26), Upper Skeena (seven) and Nisga'a (five).

That latter category includes the Cariboo-Chilcotin and Fernie local health areas in Interior Health, both of which had "clusters" of COVID-19 infections at the start of the year. The health authority declared the Fernie cluster "contained" late last week and said the same of the Cariboo-Chilcotin cluster earlier this week.

Even the Howe Sound local health area, which includes Whistler, continued trending in the right direction on the latest map. The region recorded 48 cases during the week that ended on Feb. 20, the equivalent of between 15 and 20 cases per 100,000 residents per day.

That's a decrease from the previous week, when Howe Sound saw 72 new cases and was over the 20-per-100,000 threshold.

According to an update from Vancouver Coastal Health on Thursday, officials have seen "a further reduction in COVID-19 transmission" in Whistler itself.

There have been a total of 702 cases in the resort municipality since Jan. 1, the health authority said, adding that 671 people who have tested positive in Whistler since that date have now recovered.

"The reported cases continue to be among young adults who reside in Whistler, with COVID-19 transmission occurring predominantly in household settings," Vancouver Coastal Health said.

In Metro Vancouver, the local health area that includes most of the City of Surrey is once again the region with the largest number of total cases. During the week shown on the map, the region recorded 579 new cases, equivalent to between 15 and 20 infections per 100,000 residents each day.

The City of Vancouver, which is divided into six different local health areas, recorded a total of 546 new cases of COVID-19 during the week that ended Feb. 20, according to the map.

The full-size map can be viewed on the BCCDC website.

B.C. 'full steam ahead' in using AstraZeneca as review deems it safe for use

'I don't feel ready at all,' Vancouver's Miller says in 'brutally honest' answer on Canucks' return after COVID-19 outbreak