Wheelchair burlesque to strip down stigma, sex up disability 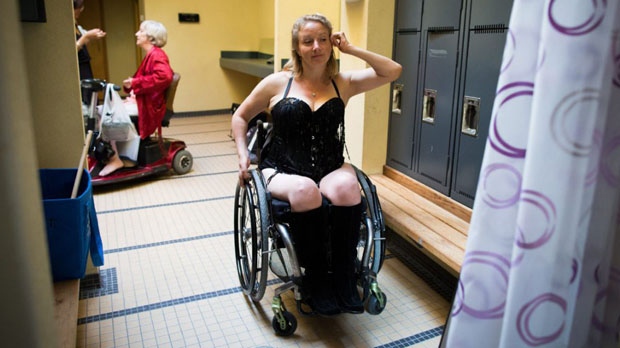 A group of performers who have disabilities will bare their hearts and bodies in burlesque cabaret "Sexy Voices," created to shed light on a topic that goes underexposed. (DARRYL DYCK / THE CANADIAN PRESS)

VANCOUVER - Talking about sex can be awkward for anyone, but some people with disabilities say expressing their most intimate needs can often feel insurmountable.

To challenge the taboo, a group of performers who have disabilities will bare their hearts and bodies in a new burlesque cabaret that includes a wheelchair striptease.

The show weaves together comedy, sequins and silk gowns to dress up a topic that those involved say goes underexposed.

“We have a libido like everybody else,” said Andrew Vallance, 35, who will host the show that opens this week in Vancouver.

“But there's a whole load of prejudice and institutional barriers that prevent us from expressing our sexualities. It's about time we knocked those barriers down.”

It's not physical, but attitudinal barriers that are the greatest challenges for people with disabilities, Cohen said.

The community-based performance will push boundaries through a series of vignettes by people from their 20s to 70s who self-identify as living with a disability.

Along with being entertained, Cohen hopes audiences will acknowledge that many people with disabilities are denied sexual identities, ranging from overt stigma to incidentally not being perceived as having the capacity for intimacy.

“People just assume that somebody who is perhaps a wheelchair user doesn't have a functionality with regards to sexuality,” Cohen said.

“That's often not the case. Sexuality is just as important to those who live with disabilities as anybody else.”

The stories on stage will range from racy and sexually explicit to quite sweet, said director Rachel Peake. The goal is to portray people with disabilities as three-dimensional through the illumination of their sex lives, she said.

In one number, a woman who is quadriplegic gives a funny, frustrated retelling of how she is overlooked by men. She then busts out in a burlesque routine, stripping down to a corset while dancing with her chair, said Peake.

“She's a very strong woman, very fit, she's able to cover a lot of ground. Obviously there are certain restrictions,” Peake said. “She'll get some momentum going with the chair, and then she can free up her hand to pull something off and throw it.”

Another piece involves a performer reciting a love letter to her accessibility devices.

“Which tend to be the best kinky toys that have ever been made, basically,” Peake said. “We (use) shadow play and a bit of humour.”

While some performances air on the outrageous, others are aimed at evoking outrage. Audiences will hear how a woman in a wheelchair was once complimented by being told, “You're too pretty to be in a wheelchair.”

“You can't come to the show and not face your own biases, prejudices, blocks,” Peake said.

Vallance, who has cerebral palsy, said he grew up crushing on gorgeous, talented women like other teens. But his disability created an unspoken sexual frustration that at times led to anger, or crying out in his sleep.

As he was empowered to understand the problem, he developed solutions, he said.

“We're seen as asexual people. And sometimes we're even punished for expressing our sexuality,” he said.

He hopes the cabaret will stir people toward embracing conversations about people with disabilities having sex for families and for pleasure.

“Three performances will not completely destroy systemic prejudices,” he said. “But it will help. If only just a little bit.”