What's open and closed on Remembrance Day in Vancouver 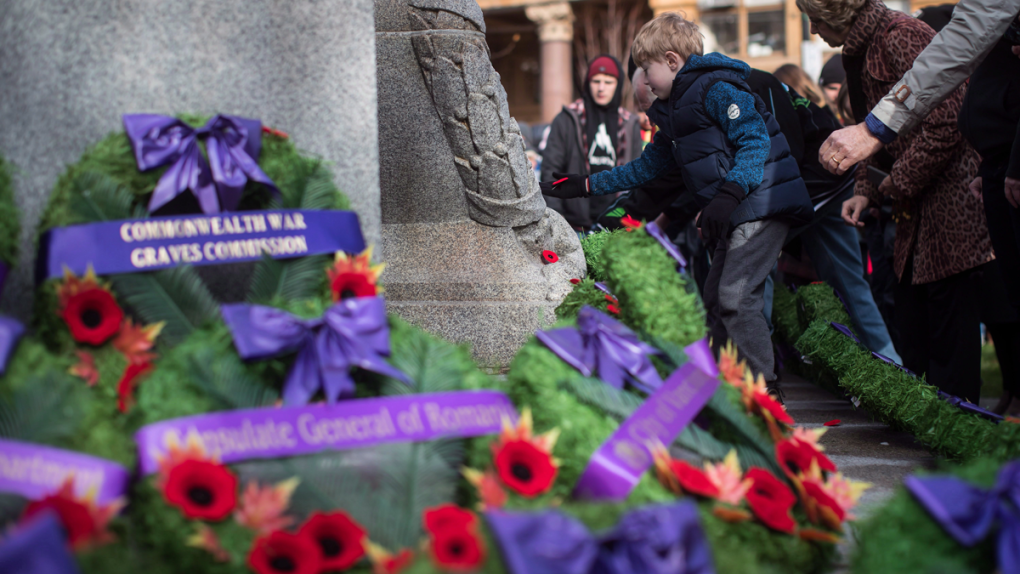 A young boy places his poppy on a wreath at the Victory Square Cenotaph after a Remembrance Day ceremony in Vancouver, on Sunday November 11, 2018. (Darryl Dyck / THE CANADIAN PRESS)

VANCOUVER – Remembrance Day is not a holiday for everyone, but some employers give staff the day off to mark the solemn occasion.

Here's a quick look at what will be open and closed on Monday:

SkyTrains, buses and SeaBuses will operate on TransLink's holiday schedule, which is the same as its Sunday schedule. The West Coast Express will not be running.

Riders should check for updates in the morning, however, as ongoing labour disputes may have further impact on service.

Holiday fares will be in effect, so only a Zone One fare is required for travel.

Veterans can ride for free on Monday by showing their membership card. Fares will also be waived for all uniformed members of the armed forces, police, fire departments, the Coast Guard and BC Ambulance.

Veterans taking the ferry will also be able to ride for free on Remembrance Day. The offer is also available for other military personnel, including cadets and active, reserve and retired members.

They must be travelling in uniform or present official identification to qualify for the discount, which is being offered for the first time.

Seniors can also travel for free on the holiday Monday.

BC Ferries is offering an extra 28 sailings over the long weekend in effort to prevent congestion.

In the City of Vancouver, veterans with a marked licence plate can park for free between Nov. 4 and 11.

Provincial liquor stores will also be open Monday, but check the hours of your nearest location before heading out. Some locations list their holiday hours as unchanged, while others are operating under reduced hours.

Most private stores will be open, though owners may also choose to reduce their hours.

Emergency departments at major hospitals in Metro Vancouver will be open as usual.

Doctors' offices and clinics could be closed, so it's best to check online or call before heading out.

Many major banks will be closed on Monday, but online services will be available as usual.

Those who need to visit a branch are advised to check the hours of their nearest location for more information.

Federal government offices including Service Canada and passport offices will be closed.

Remembrance Day is also a holiday for B.C. government workers, and offices including ICBC will be closed. The insurance provider's 24-7 Dial-a-Claim service line will still be open, and claims can also be reported online.

City halls will be closed for the holiday, as are most public libraries. Community centres may also be closed or operating on reduced hours.

Most bars, restaurants and retailers will be open on Remembrance Day, as well as major tourist attractions.

Some businesses may be operating on reduced or weekend hours, including malls choosing to open shortly after 11 a.m. to allow for a moment of silence.

Both Vancouver's Pacific Centre and Metrotown in Burnaby, for example, will open at 11:05 a.m. instead of 11.

Remembrance Day is considered a holiday for the Vancouver School Board, Surrey Schools and others.

Some post-secondary institutions will also be closed, including BCIT, UBC and SFU.