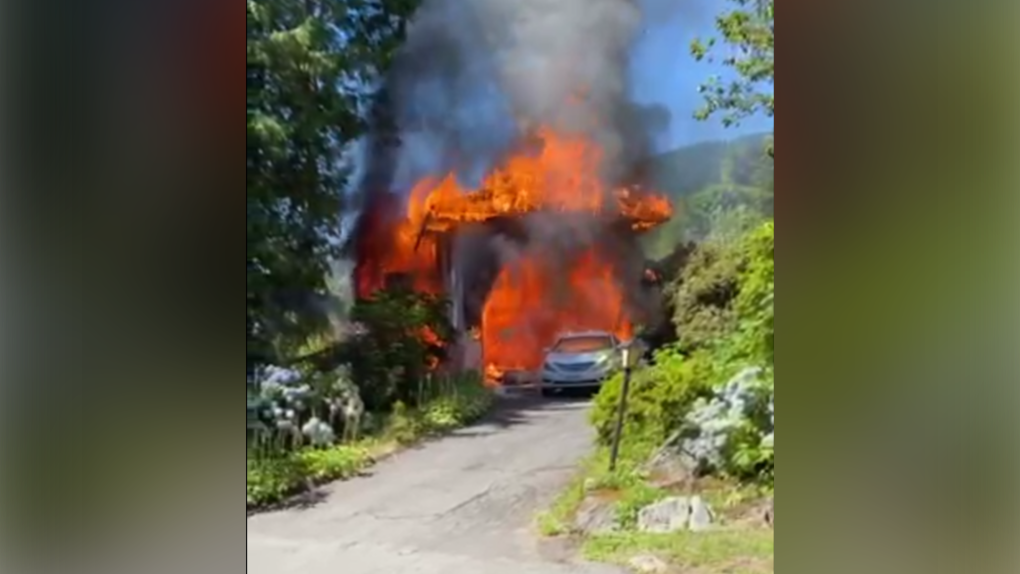 This image from a video submitted by Cate Brown shows a house on fire in West Vancouver on Aug. 7, 2022.

Smoke from a fire that engulfed a home in West Vancouver could be seen from kilometres away Sunday afternoon, as crews closed a major road to fight the blaze.

According to a tweet from West Vancouver Fire & Rescue, the structure fire broke out around 3 p.m. on Marine Drive near 30 Street.

Photos posted on social media showed a plume of smoke visible from the crowded beaches in Vancouver.

Video submitted by a neighbour to CTV News shows a home completely engulfed in flames. According to Cate Brown, who lives next door, no one was home when the fire broke out but that ambulances were on hand to assist firefighters who were working in extremely hot weather.

Brown also told CTV News a Good Samaritan driving by jumped out of his car and picked up a garden hose, helping to prevent the flames from spreading onto an adjacent property until crews arrived.

"The fire would have absolutely carried through onto our property if it wasn’t for him and his fast actions," Cate Brown wrote in an email, adding his name is Ryan Hunter and he is a former wildfire fighter.

"He was amazing and I’m so grateful."

A still from a video submitted by Cate Brown shows a Good Samaritan who picked up a garden hose to try to help contain a fire in West Vancouver.

CTV News has contacted the fire department for more details. This story will be updated when a response is received.

Price at the pumps hold no surprise this morning, with national averaging slipping

Drivers across Canada were bracing for a big bump in the price at the pumps today, with whispers of a 10-cent hike. But according to the CAA's gas price tracker, as of 4 a.m., the national average price of gas slipped from $1.64 per litre to $1.61.

This year's Nobel Prize in chemistry has been awarded in equal parts to Carolyn R. Bertozzi, Morten Meldal and K. Barry Sharpless for developing a way of 'snapping molecules together.'